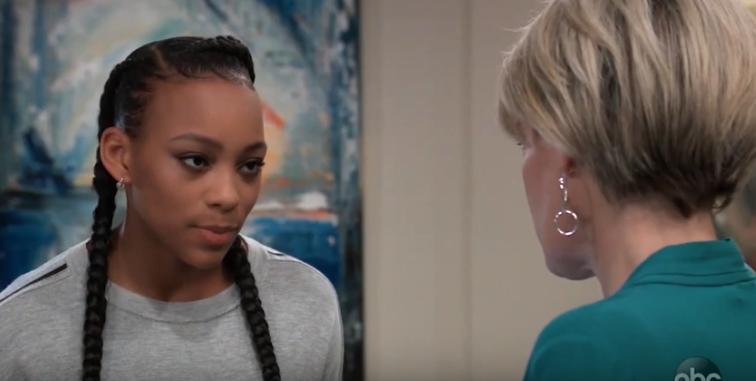 General Hospital spoilers tease that Trina Robinson (Sydney Mikayla) will confide to her mentor, Ava Jerome Cassadine (Maura West) about her true relationship with her mother, Portia Robinson (Brook Kerr) among other things, in an upcoming episode of GH!

Trina has a lot on her mind – and she tells Ava a lot of things she doesn’t feel that her mother would think are important. But these things are important to Trina – and Ava understands that, so she makes herself available to Trina anytime that she needs to talk. For one thing, she has the “Three Musketeers” relationship between herself, Cameron Webber (William Lipton) and Josslyn Jacks (Eden McCoy) on her mind, and she feels like she’s messed that up, because she knows that Cameron has been into Joss in the past, and now she knows that Cam is into her, the two having been drawn together through their mutual horrible experience of having been kidnapped!

General Hospital viewers will recall that the two kissed each other in a recent episode after an emotionally difficult experience. Trina is concerned that their friendship will not be the same if she and Cameron couple up, when Joss still has no one, having tried to get together with Dev Cerci (Ashton Arbab) only to have him tell her he didn’t think of her that way. Trina knows that romances among a “gang” of teens often destroy friendships when two of them couple up and she feels responsible if Joss is hurt when she finds out her and Cameron might be a thing! She had tested the waters with Joss in a recent episode, but Joss denied anything romantic between herself and Cameron, having known each other and played together since they were toddlers!

GH Spoilers: Trina Robinson Talks About Her Relationship With Her Mother

Trina then starts talking about her relationship with her mother – her TRUE relationship with her mother, not what Ava saw in the gallery when Portia came looking for Trina when she had skipped classes to hang out at the art gallery, wanting a distraction from her grief over her father, Marcus Taggert’s (Réal Andrews) murder. Trina tells Ava that Portia’s response is not the norm – that usually she has been too busy with her career and her patients to be at home a lot when Trina is, and she’s been on her own a lot. In a way Portia’s sudden hovering is just weird – and she feels like her mom is checking up on her and no longer trusts her! Like her trip to Niagara Falls with Joss, Cam and Oscar Nero Quartermaine (Garren Lake Stitt) for instance – if Portia had been paying as much attention as she is now, all of a sudden, she would have put a stop to that!

As it was, she didn’t even show up when Cameron messed up the car and Oscar collapsed and she had to go home hitching a ride with one of the others and their parents! Ava gets it – although she’d been in a crisis of her own at the time, as was Joss’s mother! She explains that she made the same mistakes with Kiki Jerome (Hayley Erin) when she, as the single mother, had to work. Sometimes it’s hard to choose between needing to work and being home with your kid, especially if in her case she was building a business, whereas Portia was probably building a career, and as a doctor was probably on call a lot. She tries not to put a further rift between Trina and Portia while becoming closer with Trina herself.

The Bold and the Beautiful News: Scott Clifton Is Keeping Things In The ‘Feline’ Family