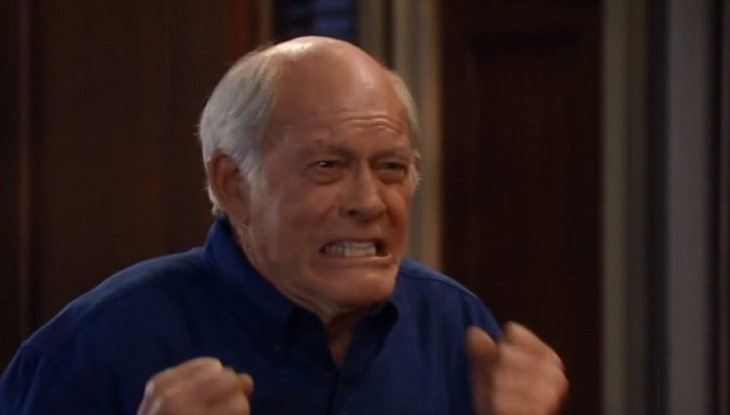 Mike Corbin is brought into General Hospital after suffering a fall at Turning Woods Memory Care Center, and even though he just suffered a minor injury to his wrist, he becomes very disoriented and does not recognize Sonny. That is not necessarily abnormal in Mike’s “new normal”; after all, he does have Alzheimer’s disease and he is in one of the later stages. He is in a strange place coming in from one he was accustomed to. General Hospital viewers will also recall from a recent episode that Sonny told Jason Morgan (Steve Burton) that Mike was having nightmares from the attack that Cyrus Renault’s (Jeff Kober) henchmen had perpetrated on the three of them in the bar in Bensonhurst that they had visited, intending to put Mike into an experimental treatment program for Alzheimer’s disease patients, dealing with brain waves.

Sonny had to make the heart-rending decision to not enroll Mike because of the danger posed by the as yet unknown enemy at that time. General Hospital viewers have seen Mike’s slow but sure decline over the past several months, once having difficulty to know what to do with a puzzle piece while sitting at a coffee table at Turning Woods, and having taken off his shoes and appeared to be trying to figure out where they fit in his shoes! Carly Corinthos (Laura Wright) helped him complete the picture puzzle. More recently, Brook Lynn Quartermaine, (Amanda Setton), in a sweet gesture, has been using her musical talents at Turning Woods, and paying special attention to Mike. She told Sonny in one recent episode that science has proven songs can be understood by Alzheimer’s patients even when they cannot understand speech, that singing words to them as one does when singing a song seems to get past the confusion.

General Hospital Rumors: Is Portia Feeling Guilty For Not Being There For Trina? https://t.co/4ulCKZrwRq pic.twitter.com/kAgRUMVr0r

GH Spoilers: Mike Corbin May Be Worse Than Sonny Corinthos Ever Imagined

Alzheimer’s patients go into a stage where they cannot walk or talk, but this may or may not be the case with Mike. Sonny is not surprised that Mike doesn’t know him when he comes to visit him once the General Hospital medical personnel have gotten him settled into a room, but that’s because his cognitive decline has been so gradual. It’s not necessarily abnormal for him to have taken a little tumble, nor is it necessarily abnormal for him to wake up in the morning in a different place than where he had been and to take a long time to get some of his bearings back. But what is not normal, and what upsets Sonny so badly, is Mike’s refusal to get out of bed and his refusal to try to stand up! He obviously braced himself on his hand when he fell at Turning Woods, for his wrist to have become injured.

Sonny doesn’t know whether Mike CANNOT stand up or if he is AFRAID to try to stand up, considering the effect the fearful situation in the bar in Bensonhurst had on him. However, medical opinions from Dr. Portia Robinson (Brook Kerr) who has been tasked with examining Mike and his progress, and from Nurse Elizabeth Baldwin (Rebecca Herbst) are worrying Sonny, who at first is thinking, “Well, okay – is this a function of his injury? Is he in pain and does that have something to do with it?” Meanwhile, Portia and Elizabeth may be pushing the agenda that Mike is in the final stage and his brain is not controlling his physical processes anymore!