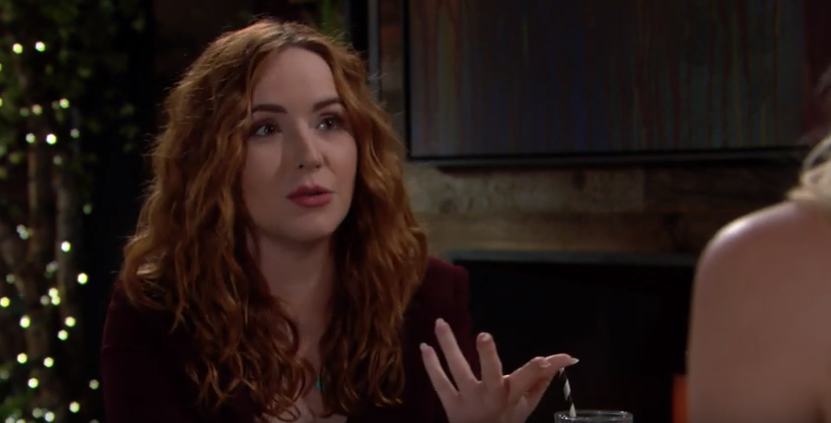 The Young and the Restless spoilers tease that while these two women have certainly seen their fair share of drama between them, it looks like there’s very little chance that they will ever give their volatile relationship a second chance. Actually, make that a third, or even fourth chance if anyone is still keeping count as this point. A lot of viewers can’t help but wonder if Tessa (Cait Fairbanks) should give Mariah (Camryn Grimes) another chance after she was caught cheating on her with another woman. Here’s what you need to know.

While it was Mariah who had a hard time trusting Tessa and was worried that she would cheat on her while out on the road with her new tour buddy, Tanner, she ended up doing the dirt deed first. Feeling desperate, lonely, and confused, Mariah couldn’t help but strike up a conversation with a pretty blonde that she met at the hotel bar. It didn’t take very long for Mariah to invite her back to her apartment and that’s where Tessa suddenly came in and saw the two women together, much to Mariah’s shock and surprise.

Even though Mariah says that she will do whatever it takes to win Tessa’s trust and heart again, actress Cait Fairbanks doesn’t believe that it’s going to be that easy. She recently told Soaps in Depth in a new interview, “I think most relationships end or suffer after this kind of betrayal. But Mariah has forgiven Tessa for a lot of things, so maybe Tessa will forgive Mariah. Or maybe she will say she will forgive her but she really won’t, because she knows that in the back of her mind things will never chance between them. She can find someone else.”

The Young and the Restless Spoilers: What’s Next For Mariah And Tessa?

Needless to say, The Young and the Restless fans will have to tune in to find out if Tessa will indeed dump Mariah and of course, what will happen next. Check your local listings for times.

In the meantime, don’t forget to come back right here for all the latest news and updates on all of your favorite soaps including The Young and the Restless, The Bold and the Beautiful, General Hospital and Days of Our Lives.

The Bold and the Beautiful Spoilers: Sally Arranges A Special Delivery For Flo – Wyatt Left Shocked