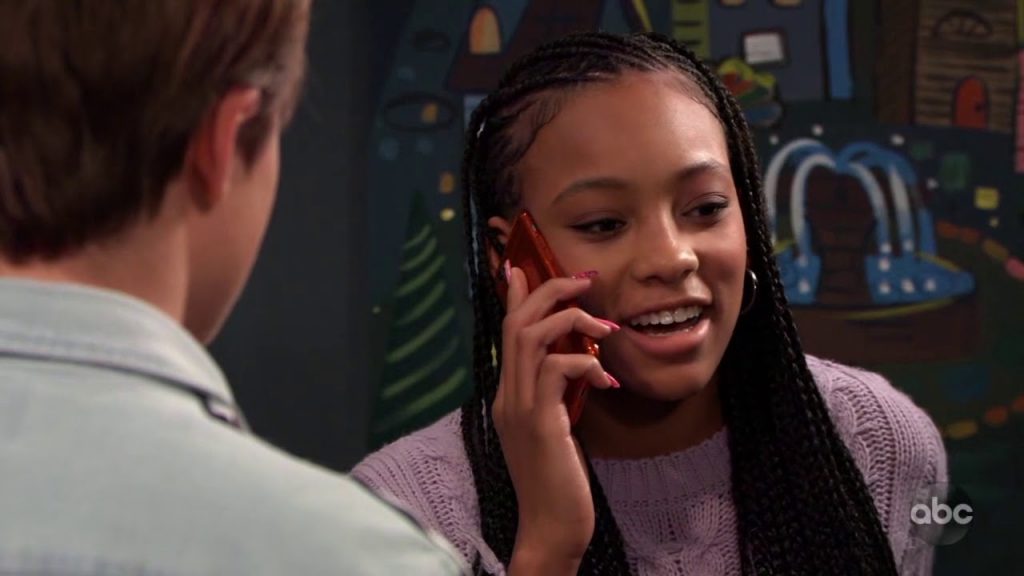 Knowing that Cameron has been pining for Josslyn Jacks (Eden McCoy) for a long, long, time, and that Josslyn is ready to move on past her late boyfriend Oscar Nero Quartermaine (Garren Lake Stitt) by her kissing Dev Cerci (Ashton Arbab) and getting embarrassed about it when he didn’t respond the same way, Trina has hatched a matchmaking scheme! Cameron won’t come out and ask Joss to the winter formal or even out for a casual date! So, under the ruse of going to the winter formal together because neither one has a real date, she tells Joss that Cam and she are going together for real and discovered they have feelings for each other, with the goal of making Joss jealous, which will be a telltale sign that she is into Cam even if she hasn’t admitted it!

General Hospital Recap Monday, February 24: Michael has his son back – Nikolas and Elizabeth have a serious chat https://t.co/jYQtAIoPax pic.twitter.com/ypwMa2at1n

When Cameron sees Trina lying to Joss instead of telling her they are just going as friends, he gets upset – at first; until Trina explains there’s a method to her madness! She wanted to see if the ruse would make Joss jealous and that way they would know that Joss is into Cam. Cameron isn’t really super appreciative of her efforts, but deep down he has his hopes that this little well-meaning trick will work to smoke out Joss’s true feelings for him so he can admit his true feelings for her. It has just never been the right time to admit his interest or feelings to her, and this actually goes back quite a few years!

They were childhood playmates and grew up together as close friends, even best friends, and he knows Josslyn very, very, well, much better than Trina does actually, Trina being a relatively recent addition as Josslyn and Cameron’s friend. Trina hopes that with Josslyn’s personality, much like her mother Carly Corinthos’ (Laura Wright) when that green-eyed monster starts making itself known, that she won’t hold back and want to know how serious Cameron and Trina are, and maybe she’ll admit that she would consider Cameron more than a platonic friend if the occasion arises!

But even if she doesn’t go that far, if they can tell she’s jealous, it will be obvious in her looks at the couple, how she acts around them and how she takes it if they start pretending to get even more serious in front of her! Then Trina will know her scheme worked and she and Cameron can tell Joss the truth, and hopefully Cam and Joss will finally get together!