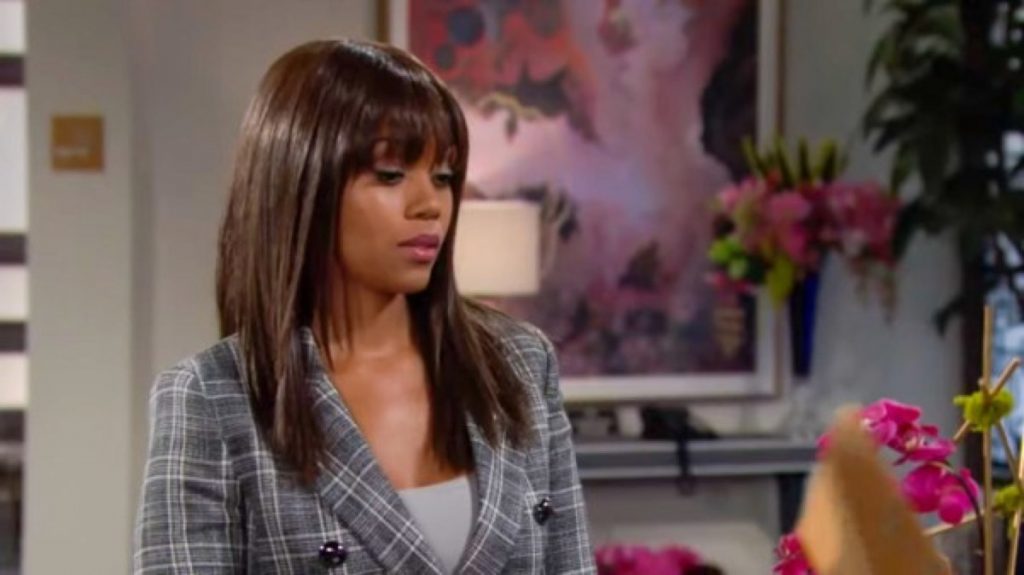 The Young and the Restless (Y&R) spoilers for Tuesday, February 25, tease that Abby Newman (Melissa Ordway) will have a new tactic in mind. In a suite at the Grand Phoenix, Abby talks to Chance Chancellor (Donny Boaz) about handling Phyllis Summers (Michelle Stafford).

When Chance worries Abby’s going to give Phyllis the hotel, Abby explains that she has a different strategy. She hopes to finally end this, even if it means giving Phyllis some bragging rights.

The Young and the Restless Spoilers – Amanda Sinclair Is Feeling Guilty

At the recently renovated Crimson Lights, Phyllis thanks someone over the phone for fighting the good fight. Meanwhile, Amanda Sinclair (Mishael Morgan) spends her time at the coffeehouse feeling guilty. Rey Rosales (Jordi Vilasuso) maintains that Amanda wasn’t responsible for what happened with Ripley Turner (Christian Keyes).

After Rey leaves, Billy Abbott (Jason Thompson) also works to reassure Amanda. He hates that he didn’t listen about staying away from the gala. Since so much drama has erupted from their connection, Amanda thinks she needs to keep her distance.

Devon Hamilton (Bryton James) and Elena Dawson (Brytni Sarpy) see Amanda exit before they sit down to chat. They realize Amanda wiped out all traces of herself online because of Ripley, not her involvement in Colin Atkinson’s (Tristan Rogers) case. Elena presumes the reason Amanda took the case in the first place was to get out of town.

Y&R Spoilers – Amanda Sinclair Could Be In Danger

Devon points out that Amanda could still be in danger. Moments later, Chance has news about the search for Colin. He was last seen in Luxembourg before running off again. Devon brings up Ripley and how he needs to be captured. Once Devon’s alone with Elena again, he reflects on Victoria’s situation as well as Amanda’s. Devon views it as a wakeup call of focusing on what matters most.

At Society, Mariah Copeland (Camryn Grimes) speaks with Lindsay (Kirby Bliss Blanton) the bartender about her job search before Theo Vanderway (Tyler Johnson) appears. He goads Mariah a bit, but she isn’t having it. Mariah wants Theo to scram, but he offers an apology and starts talking about Tanner Watts’ (Chase Coleman) new social media ploy.

Theo whips out his phone and shows Mariah a pic of Tanner with Tessa Porter (Cait Fairbanks). It’s rather cutesy and features Tanner with his arm around Tessa. Theo suggests the angle involves inventing a fake feud with Tanner’s actual girlfriend. He thinks the fans will eat it up and download more music. Theo calls it “genius,” but Mariah clearly doesn’t share that opinion.

Next, Mariah gets on a video chat with Tessa before a shirtless Tanner jumps in. Tanner starts kidding around about his new power-couple status with Tessa. After Tanner steps away, Mariah gets agitated and asks if they’ve slept together. Tessa is shocked, but Mariah keeps at it and wonders why she still hasn’t answered the question. Things head even further south when Tessa suggests she shouldn’t have to.

Mariah winds up disconnecting before Theo inquires about the call. She snaps about them not being friends before Lindsay pops up again. Her shift’s over, so they leave to get drinks elsewhere. Theo gazes at them as they exit.

At the Chancellor mansion, Jill Abbott (Jess Walton) has a job offer for Billy. She wants him to run Chancellor Industries’ new media division, but he feels like it’s something Jill just made up. Jill explains that she wants to make Chancellor more relevant and thinks Billy can help. Unfortunately, Billy’s not up for it. He notes that it tends to backfire when people trust him.

Back at the Grand Phoenix, Phyllis is taken aback when Abby wants to her buy her out. Abby’s offer is for three times what the shares are worth. Once Phyllis goes off to contemplate it, Abby speaks to Amanda about increased security measures at the hotel. She also has updates on Victoria, who’s still in a coma.

Afterward, Amanda talks to Nate Hastings (Sean Dominic) about Victoria’s condition. She wishes Nate could guarantee that Victoria would pull through her crisis. Amanda’s distraught over all the danger she’s brought to Genoa City. She considers going into hiding, but Nate works to keep her in town.

Over with Abby again, she’s surprised when a man arrives with an envelope. Abby learns she’s been served; a former guest has filed a lawsuit. Phyllis seems pleased and argues that Abby should give her the Grand Phoenix. She thinks now’s the time for Abby to walk away.

The Young and the Restless spoilers say another action-packed episode’s coming up. We’ll keep you posted as other Y&R details emerge. Stay tuned to see what else is brewing in GC.

General Hospital Recap Monday, February 24: Michael has his son back – Nikolas and Elizabeth have a serious chat