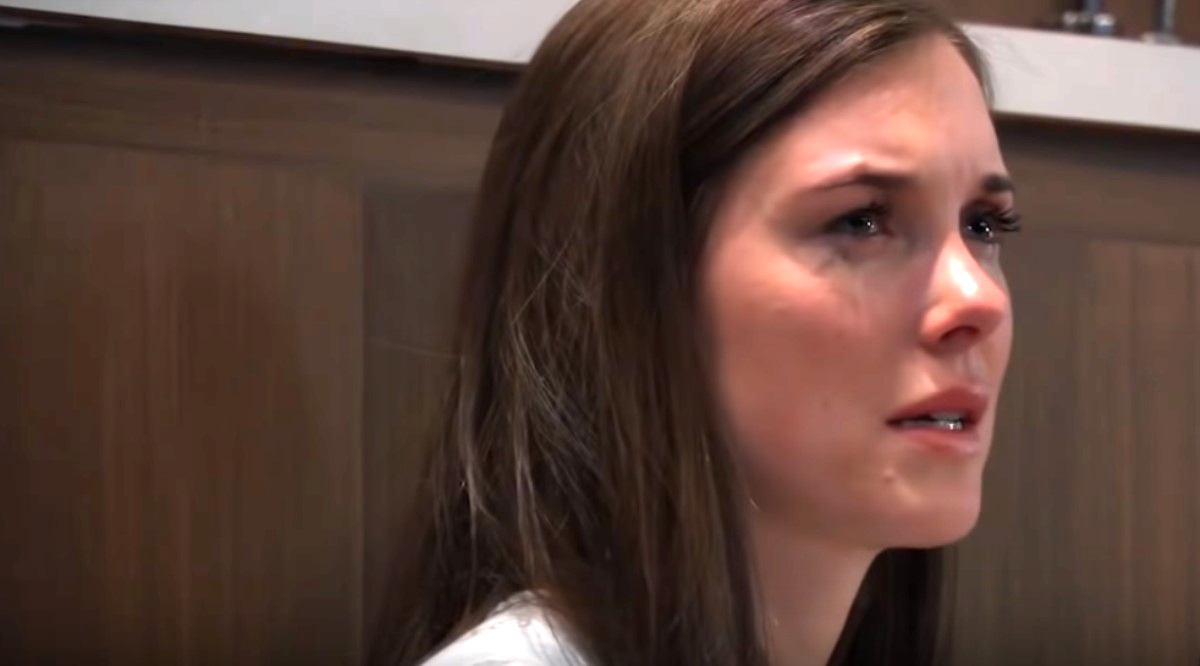 General Hospital spoilers tease that Willow Tait (Katelyn MacMullen) tries to adjust to her new reality in an upcoming episode of GH!

As General Hospital viewers will recall, Willow was devastated to learn that her baby, the real Wiley Cooper-Jones (Erik and Theodore Olson) who she gave up for adoption and that Brad Cooper (Parry Shen) and Lucas Jones (Ryan Carnes) had adopted died of sudden infant death syndrome when he was only a couple of days old and that Brad had swapped the dead baby for Jonah Corinthos (Erik and Theodore Olson) the live baby of Michael Corinthos (Chad Duell), and had been raising him, and not Willow’s baby, for the last year and a half!

Willow screamed in agony in the examining room at General Hospital where Detective Harrison Chase (Josh Swickard) had brought her after Nelle Benson Archer (Chloe Lanier) had knocked her out and given her a mild concussion as she fought with her to get Wiley away from Willow! She would have succeeded, had Chase and Michael not gotten there in time! Now, Willow must learn to adjust to her new reality – that the baby she has loved and been attached to is actually Michael and Nelle’s child, not hers, and that hers is in the grave marked “Jonah Corinthos”.

GH Spoilers – Willow Tait Is Not Alone In Her Grief

Willow is not alone in her grief – her mother, Lorraine “Harmony” Miller (Inga Cadranel) needs to be notified as well. She will be just as shocked and grieved to find out what happened, and she will secretly wish she had killed Nelle when they were cellmates – but then, that’s a wish that the whole family on both sides of the situation share with her, whether they share their wishes or not!

Sam McCall (Kelly Monaco) has lost a nephew, Julian Jerome (William DeVry) has lost a grandson, and Lucas and Brad have lost a son, although Lucas still has a great-nephew and will likely be still an active part of Wiley’s life. But Willow is way more attached to Wiley/Jonah than is psychologically healthy – and even though she is happy for Michael, her loss digs deep into her soul, as does her grief!

It is like being given false hope that becomes false reality and then when one is completely invested in the lie, one finds out that he or she has been living a lie for the past year and a half!

Michael will likely invite Willow to still be in Wiley/Jonah’s life, as well as Sam, of course, Lucas and possibly even Julian. After all, Wiley has gotten used to all these people being family to him and there is no reason to take them all away from him when it’s not his fault!

Michael may even offer to Willow to take care of Wiley when he is at work, but she may not be able to handle it – she can’t break the attachment to him with being with him all the time, and besides, he will be a constant reminder that her son is dead!

The Young and the Restless Spoilers: Sparks Between Nick and Phyllis Are Troubling – Phick Fans Disagree