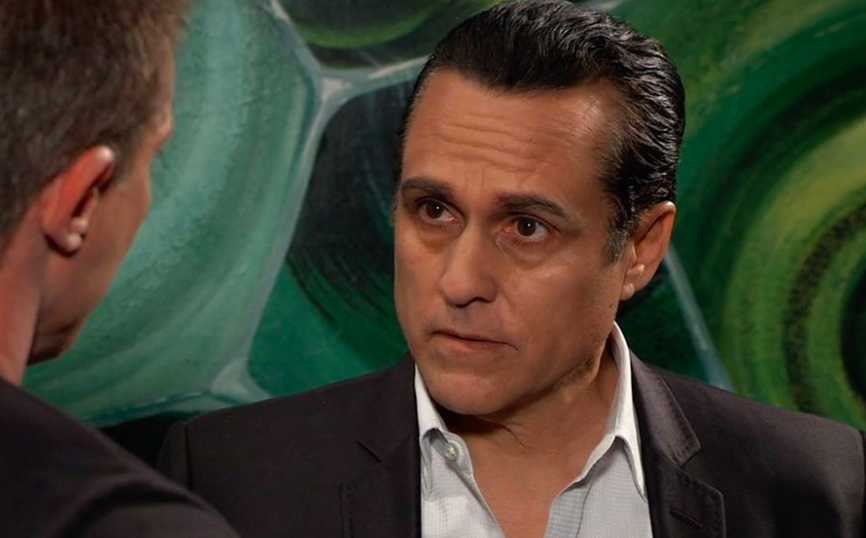 General Hospital spoilers tease that Sonny Corinthos (Maurice Benard) will try to comfort his father Mike Corbin (Max Gail) when a bar they are in is attacked by a gunman in an upcoming episode of GH!

Sonny, Mike, Jason Morgan (Steve Burton) and Gladys Corbin (Bonnie Burroughs) all appear to be in danger as they are in the same bar, which may be Charlie’s Pub since it is on the waterfront, as a Jason spots a gunman and yells for everyone to get down! The scene didn’t show parts of the bar that would for sure identify it as Charlie’s Pub so it could be a different one as well. There was just an attack at Sonny’s warehouse or close to it where Laura Collins (Genie Francis) was shot, and fell on some bags of coffee although it appeared that Michael Corinthos (Chad Duell) had been the target. As Jason hides behind a post in the bar and returns fire, Sonny pushes Mike down behind the bar to shield him and he has a meltdown! Gladys also has a meltdown as she tries to hide just as a gunman walks by her, close to what appears to be a door in the bar and cries in terror that they’re all going to be killed!

GH Spoilers: Is Mike Corbin Reacting To His Current Situation Or Is He Triggered By A Past One?

Is Mike reacting to his current situation or has he been triggered by a past one? It is difficult to tell, but Sonny can’t afford to be distracted when Jason is the only one who is able to defend them all against the gunman! Sonny has to think quickly, as all of them are in danger with at least one shooter, and possibly two or three! Mike is terrified and Gladys doesn’t help the situation any when she hollers her fears right next to a gunman who is getting ready to shoot! Who knows if she might get killed right then and there and there aren’t enough of Jason to go around to stop him? Apparently this is a gang and probably rivals looking to take over Sonny’s territory since these appear to be coordinated attacks! His warehouse is being attacked at the same time he, Jason, Gladys and Mike are in the bar and attackers show up there!

Has Mike Corbin Been Shot?

It is a possibility that Mike is hit! The General Hospital weekly promo, “Turf Wars” show that Mike was in front of Sonny as Jason shouted the warning, and the gunman was pointing right towards Mike and Sonny! Either that gunman overestimates his expertise thinking he’s going to aim for Sonny with Mike in the way, or maybe he was aiming for Mike? Could Mike have an enemy from the past that is targeting Sonny’s business and his family? Sonny gets Mike on the floor behind the bar, and Mike is shaking and crying – but did he get hit?