General Hospital spoilers for the week beginning Monday, July 29thfinds more twists and turns as some of our favorite characters in Port Charles are either hiding the truth or trying to find out the truth. Here’s what you need to know.

If there’s one person who desperately wants to see Shiloh Archer (Coby Ryan McLaughlin) gone forever, it’s definitely Jason Morgan (Steve Morgan). Actually, make that Jason and just about every other person in Pot Charles. Even though he and Sam McCall (Kelly Monaco) have been doing everything they can to oust the controversial Dawn of Day cult leader once and for all, he’s still roaming the streets and pushing buttons with everyone around town.

During the Monday, July 29thepisode Shiloh will be going too far for Jason’s liking. But then again, at this point the only place that Shiloh should be – according to Jason – is six feet under! However, Shiloh has managed to get underneath Jason’s skin again but this time around he’s going to put a stop to it. 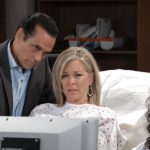 But that’s not the only problem that Jason has been dealing with lately. General Hospital spoilers tease that he’s also going to butt heads with Elizabeth Webber (Rebecca Herbst) with the two of them both standing their ground, especially when it comes to how they co-parent their son, Jake. During the Thursday, August 1 episode, Jason and Elizabeth will be finding themselves at a crossroads when the Stone Cold fellow will absolutely, positively refuse to see things from Elizabeth’s point of view. And trust us, this isn’t going to end very well with either one of them.

General Hospital Spoiler – Can The Two Of Them Compromise?

Will Jason and Elizabeth hopefully agree to work together? Or will they agree to disagree? While there’s no doubt that they have had a very complicated past, Jason definitely didn’t expect Elizabeth to throw him a curve ball like this one. And yes, Sam might have something to say about this too. Fans will have to tune in to find out what will happen next!