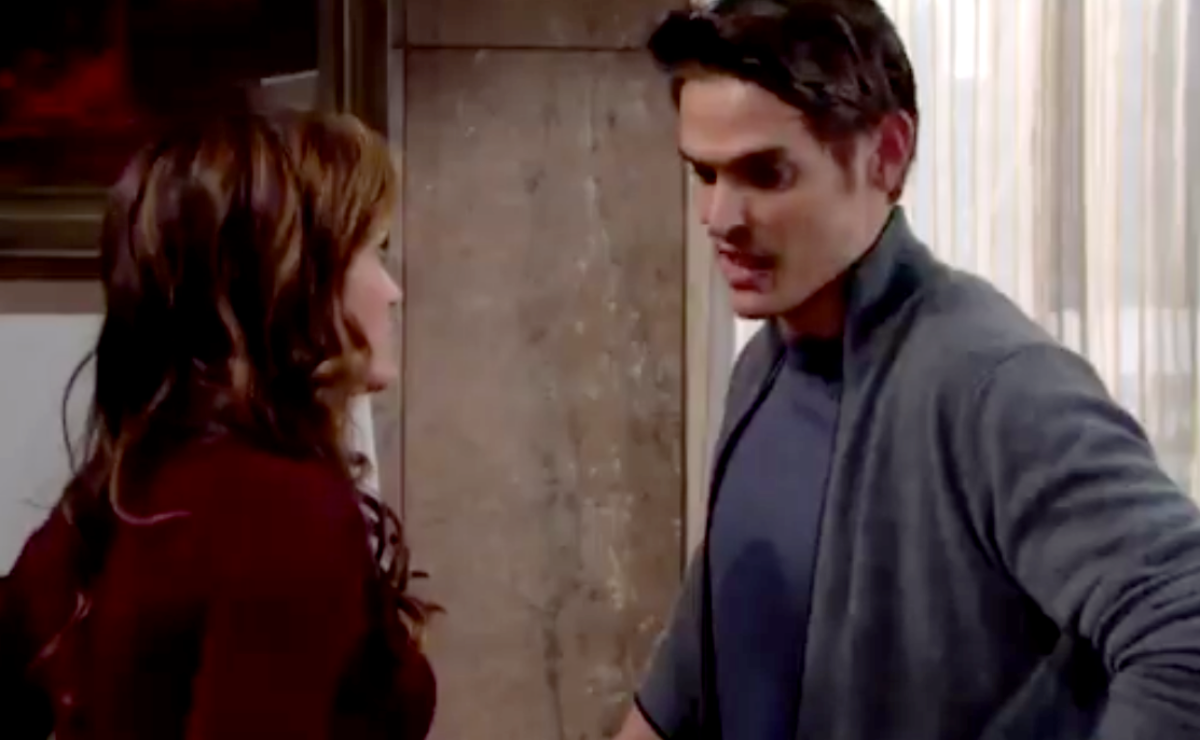 The Young and the Restless (Y&R) spoilers for Thursday, January 23, tease that some hot drama’s coming up. Before we dive in, we should mention that impeachment trial coverage has been affecting Y&R’s schedule. Just keep in mind that more preemptions could occur and throw off planned airdates.

Now let’s talk about all the action happening in this episode. First, Adam Newman (Mark Grossman) talks to Chelsea Lawson (Melissa Claire Egan) about the tech company he bought – which specializes in videogames. They also discuss Connor Newman (Judah Mackey), who just started as his new school. His parents are hopeful that Connor can be a happy, normal kid.

As Chelsea leaves to pick Connor up, she finds Chloe Mitchell (Elizabeth Hendrickson) – who’s still stewing over this “Chadam” reunion. Chelsea doesn’t want to debate the topic, but she convinces Chloe to bring Bella Fisher (Martie Blair) for hot chocolate at the coffeehouse.

At Crimson Lights later, Chelsea and Chloe smile over their kids getting along. They kid around about planning Connor and Bella’s wedding. Chloe reflects on Connor receiving Delia Abbott’s (Sophie Pollono) corneas, which means he’s able to look at Bella through Delia’s eyes.

Back at the hotel, Phyllis Summers (Michelle Stafford) makes her move with “Chance” Chancellor (Donny Boaz). Since Abby Newman (Melissa Ordway) is busy this week, Phyllis points out that she’s free. Chance gets the picture and eventually agrees to go on a dinner date with Phyllis.

Next, Chance corners Adam and reveals that “she” has gone missing. She’s off the radar completely, but Adam insists the woman will resurface. He thinks she’ll cash one her checks that he sends each month. Chance reminds Adam that there’s a lot at stake here, but Adam doesn’t seem worried about this lingering threat in Vegas.

Back at Crimson Lights, Adam appears and speaks with Chloe alone. Chloe gets agitated and snaps that she should’ve left Adam to die in the street. Adam catches on and realizes Chloe pushed him out of the way after Billy Abbott (Jason Thompson) tried to run him down. Chloe did it for Billy, but she contends that Adam owes her now.

Afterward, Chelsea brings up Adam’s earlier interaction with Chance, which she caught a glimpse of. Adam assures Chelsea there’s nothing she should know. At Jabot, Summer Newman (Hunter King) and Kyle Abbott (Michael Mealor) are ready for their business trip. Jack Abbott has some supportive words – and Kyle’s surprisingly civil to Theo.

Summer calls Kyle out for being nice to his cousin and wonders what’s up. Kyle admits he’s trying to kill Theo with kindness. Back with Jack, he speaks to Theo about the goading he’s still witnessing. Jack knows Kyle plays a role in the tension, but he wants this to stop and doesn’t intend to address it again.

At Society, Fenmore “Fen” Baldwin (Zach Tinker) nixes Devon Hamilton’s (Bryton James) plans to send him back out on tour. Fen’s grateful for everything, but he’s going to focus on staying clean and sober. Lauren Baldwin (Tracey E. Bregman) and Michael Baldwin (Christian LeBlanc) get brought up to speed next. They also learn Fen’s moving to Nashville. Farewells are never easy, but his parents intend to visit.

Over with Devon, he counsels Lola Abbott (Sasha Calle) about her fight with Kyle. Lola admits it was pretty bad, but Devon doesn’t think this is cause for concern. Speaking from experience, Devon suggests it’s normal for couples to fight sometimes. Lola still seems uneasy over how heated things got.

Kyle pops in soon after to tell Lola goodbye. They still haven’t had a chance to really talk, so Kyle hates leaving with all this tension. Lola and Kyle acknowledge that it’s been hard to make it go away. They’re not in sync right now, but they plan to have a discussion after Kyle returns. Lola and Kyle share a kiss before he goes. When Theo arrives and sees Lola later, he pauses briefly before exiting again.

At the Grand Phoenix again, Summer catches up with Phyllis and talks about her upcoming trip. Phyllis eventually suggests Summer could get Kyle back if she wanted to. She thinks Summer’s 10 times the woman Lola is. Summer’s adamant that she’s not angling to reunite with Kyle. Phyllis just doesn’t want her daughter to settle for being second best. She watches pensively as Summer leaves with Kyle.

The Young and the Restless spoilers say some exciting scenes are on the way. We’ll give you updates as other Y&R news and rumors emerge. Stay tuned to see what else is brewing on the CBS soap.