General Hospital spoilers tease another exciting day of drama for GH fans with plenty of suspense and confrontations!

At the Metro Court, Brad Cooper (Parry Shen) confesses to Nelle Benson Archer (Chloe Lanier) about another confession he made – that he told his husband, Lucas Jones (Ryan Carnes) about the baby swap. General Hospital viewers will recall that the night Jonah Corinthos (Erik and Theodore Olson) was born, the baby that Brad and Lucas adopted, who was the real son of Willow Tait (Katelyn MacMullen) and Shiloh Archer (Coby Ryan McLaughlin), who they named Wiley, died. 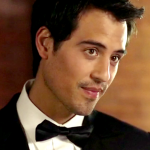 Brad was out driving aimlessly with the dead baby in the back seat and came across Nelle who had just given birth, and she talked him into taking her live baby and she took his dead one. Nelle doesn’t look too happy!

Meanwhile, Detective Harrison Chase (Josh Swickard) tells Willow, who looks like she is going to cry, that he is just not sure about her – what could that be all about and why has that conversation come up so suddenly when they were so happy? It looks like a very serious conversation between the two of them; could this be the end of “Chillow?”

Head Nurse Epiphany Johnson (Sonya Eddy) not so happily offers her assistance as she approaches someone on her floor at General Hospital whose hair looks like Sam McCall’s (Kelly Monaco) parole officer, Delores Malone (Andi Chapman). She approaches the woman with an air of authority like the only Epiphany can, and asks, “Can I help you?” Maybe Officer Delores is being perceived as harassing Sam, who has just left an examining room where she and Jason Morgan (Steve Burton) had met Dr. Hamilton Finn (Michael Easton) and later, District Attorney Robert Scorpio (Tristan Rogers).

In “The Invader” office, Lulu Spencer (Emme Rylan) tells her boss, Peter August (Wes Ramsey) that she and Dustin Phillips (Mark Lawson) just took a big step; perhaps she’s talking to Peter because she wants time off for a honeymoon? That would be a very big step, considering they have not moved in together, but why else would she be talking to Peter about a big step she’s taking with Dustin?

GH Spoilers – Dustin Phillips Has A Date With Someone Else

Meanwhile, Dustin is in front of the bar at the Metro Court, telling someone he has a date with someone else – question is, who is he talking to and who is the date with? The General Hospital weekly preview video, “Rivalries” shows him in Jasper Jacks’ (Ingo Rademacher) Aurora Media office, and Josslyn Jacks (Eden McCoy) is in the shot also, so maybe that’s what he’s talking about.

At Anna Devane’s (Finola Hughes) home, Finn, shaking papers that are undoubtedly from a file on Peter August, blows up at Anna, telling her Peter is guilty! It looks like he is trying to shake sense into Anna by vicariously shaking the handful of papers at her! Poor Anna will feel ganged up on by Finn and Robert, but Finn can see that Anna cannot be objective when it comes to Peter – which is why most police departments don’t let detectives investigate cases involving family and friends, and doctors are not allowed to treat close family members!

At the Jerome art gallery, Ava Jerome Cassadine (Maura West) continues her talk with Nina Reeves (Cynthia Watros) about Nina’s date with Jax in the Crimson office, which Valentin Cassadine (James Patrick Stuart) overheard as he had come to talk to Nina, needing a shoulder after receiving the devastating news that Nikolas Cassadine (Marcus Coloma) is the true heir to the Cassadine fortune, and he is not even a Cassadine, so Helena Cassadine (Constance Towers) must have been his birth mother after all! Ava is obviously talking about what would happen if Valentin knew, and tells Nina, “He’s going to kill Jax!”

At the door to the Aurora Media office, Valentin pulls out a gun and shoots! The General Hospital weekly preview shows more of this scene, as Dustin is in Jax’s office standing beside him and Josslyn Jacks (Eden McCoy) follows Valentin into the office! Will Dustin play hero again and push Jax out of the line of fire?