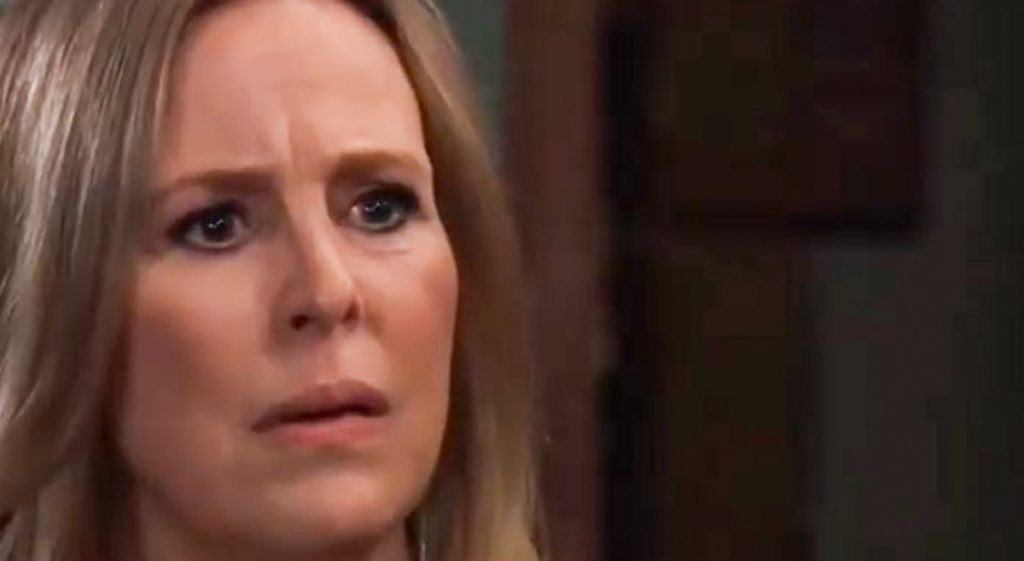 In a room at Wyndemere Castle, Laura Collins (Genie Francis) looks more shocked than she did when she saw her three years presumed dead son Nikolas Cassadine (Marcus Coloma) carry a nearly drowned Ava Jerome (Maura West) into Valentin Cassadine (James Patrick Stuart) and Nina Reeves’ (Cynthia Watros) wedding that wasn’t when Ava announced that she and Nikolas were getting married instead, and asked Laura to please stay for the ceremony! This must have been Ava’s condition for giving Nikolas the codicil!

GH Spoilers – Nina Reeves Just Wants To Get Out

Meanwhile, downstairs, a devastated Nina tells Curtis Ashford, (Donnell Turner) Jordan Ashford, (Briana Nicole Henry) and Jasper “Jax” Jacks (Ingo Rademacher) that she doesn’t need anyone to hold her hand, she just needs to get out of that house! Valentin is still in the house, and she assumes Charlotte Cassadine (Scarlett Fernandez) will be safe with Maxie Jones (Kirsten Storms) and Peter August (Wes Ramsey) upstairs watching after her. Of course, she has no idea what is going on upstairs in Charlotte’s room and that Valentin is trying to escape with her!

Upstairs in Charlotte’s bedroom, Valentin has tried to escape with Charlotte, and Maxie and Peter are trying to stop him as Valentin appears to either sucker punch Peter in the gut, or possibly even have stabbed him! Valentin is indeed desperate to escape with Charlotte, especially when she may have woken up and saw her Papa hurt Uncle Peter, which would be more traumatizing to her than anything that had gone on downstairs!

At the Corinthos home, Sonny Corinthos (Maurice Benard) asks Carly Corinthos (Laura Wright) what’s next for them. This appears to be a continuation of last week’s episode when Carly told Sonny that Nikolas was alive and well, and he started talking about Jax harboring a fugitive. Sonny felt betrayed and told her she could trust Jax, but not him! It sounds like Sonny and Carly need a little marriage counseling!

Upstairs in Charlotte’s bedroom at Wyndemere Castle, Maxie rushes to Peter’s aid after Valentin attacked him; Peter is down on the floor as Maxie cries, “Oh my god!” It sounds like Peter may have been stabbed or else Valentin packs a bigger punch than anyone would have thought! But where are Valentin and Charlotte? Will Maxie have to choose between saving Peter and saving Charlotte, and will she be able to get her away from Valentin?

Elsewhere, Anna Devane (Finola Hughes) is talking to her fiancé Dr. Hamilton Finn, (Michael Easton) Mac Scorpio (John J. York) and Felicia Scorpio (Kristina Wagner) and it sounds like the subject might be Peter! General Hospital viewers will recall that Anna found a connection she didn’t want to find between Peter and the gunman who tried to kill Dr. Andre Maddox (Anthony Montgomery) and Franco Baldwin (Roger Howarth) in the operating room at the hospital, who Peter killed, changing his mind about the hit he had ordered the gunman to perform.

Anna is smiling even though she says she won’t be satisfied until she gets all the answers! She is probably looking for a reasonable explanation as to why Peter and the gunman were working at Euro Tech, a DVX shell company at the same time. After all, if it was a large company one can’t be friends with or know everyone personally!

The Young and the Restless Spoilers: Is Chadam Moving Too Fast? Reboot Isn’t A Guarantee