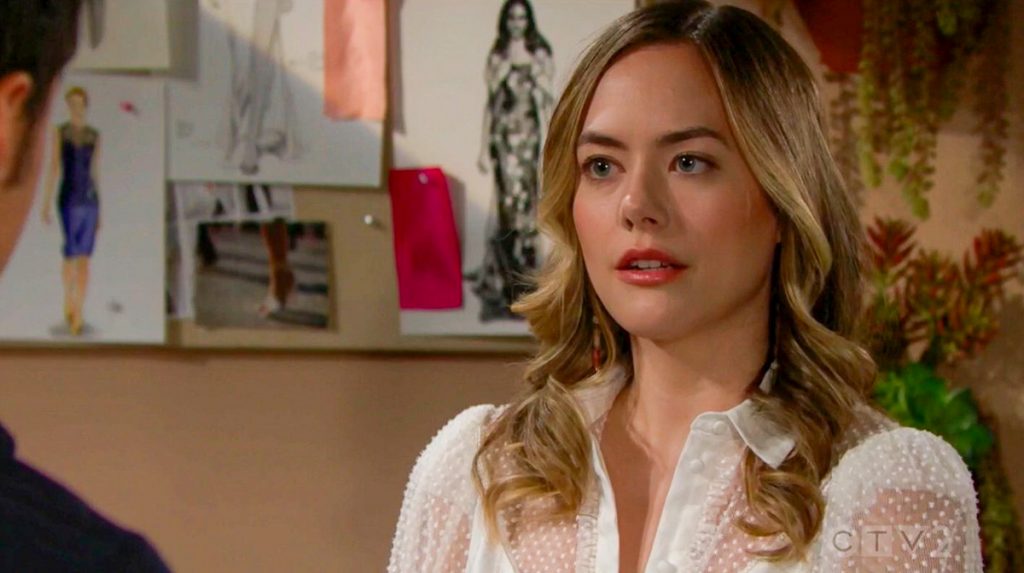 The Bold and the Beautiful spoilers for Tuesday, January 7, tease that Hope Logan (Annika Noelle) will find herself completely shocked. As B&B viewers know, she’s recently learned that Thomas Forrester (Matthew Atkinson) made a threat against Liam Spencer (Scott Clifton). He basically threatened to see Liam dead, which didn’t sit well with Liam and doesn’t sit well with Hope.

Thomas’ threat was shocking enough, but it seems that Hope’s got another big stunner coming her way on Tuesday’s episode. According to B&B spoilers, Liam will take the opportunity to propose to Hope, and his proposal will come with a big stipulation. It will all stem from Liam’s desire to keep Hope away from Thomas at all costs.

The Bold and the Beautiful spoilers say that Liam will propose marriage to Hope, but he’ll say that he wants them to start married life in a Thomas-free zone, and that he wants Hope to completely cut Thomas out of all areas of her life.

And that will mean that Hope would have to get rid of Thomas as her designer for the fashion showdown, which she wouldn’t like but could probably live with. However, it will also be clear that Liam wants her to give up her legal guardianship of Douglas Forrester (Henry Joseph Samiri) as well, so that Thomas can’t be a part of their lives going forward.

The Bold and the Beautiful News: B&B Star Obba Babatundé Talks About Working With Shemar Moore

Unfortunately for Liam, Hope will be unreceptive to Liam’s proposal with the stipulation attached. She’ll probably be horrified at the thought of giving up Douglas, and really that’s the one thing that she just won’t do at this point. According to B&B spoilers, Hope will protest, prompting Liam to walk out on her. In fact, he’ll walk right out of the cabin, leaving Hope speechless.

Next on Tuesday’s new episode of B&B, Steffy Forrester (Jacqueline MacInnes Wood) will decide that it’s time to have a serious conversation with Thomas. As B&B viewers know, she recently heard from Liam that Thomas made an ugly threat, saying that he’s bringing Hope, Steffy, and the children to Liam’s grave. Liam told Steffy that Thomas seems even more unhinged than he was before.

Of course, that came as a huge surprise to Steffy, since she was under the impression that Thomas was tiring to get his life together and was turning things around. She was feeling confident that Thomas had moved on from his obsession with Hope and that he was trying to be the best version of himself that he could be.

So, on Tuesday’s B&B episode, Steffy will confidently confront her brother, armed with the information she heard from Liam. It looks like she’ll call out her brother on the threat he made, and she’ll want to know what’s really going on. She’ll probably also want to know whether Thomas has really moved on with Zoe Buckingham (Kiara Barnes) or whether that relationship is just a sham.

Well, considering how Thomas tried to turn things around on Liam when Hope confronted him about his threat, we’re guessing that Thomas will do the same when Steffy confronts him. Surely, Thomas will insist that his relationship with Zoe is real, and that he just said some things in the heat of the moment. He’ll probably also throw in that Liam blew everything out of proportion.

We’ll see if Steffy ends up buying what Thomas is selling. But one thing’s for sure – Steffy really wants to believe in her brother, so she might be prone to giving him the benefit of the doubt.