But she loves her children more, and for their safety, she may already have plans in motion to remove herself and her children from the situation should the mob way with Cyrus Renault (Jeff Kober) escalate any further. 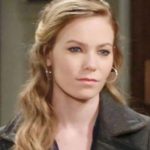 Sonny’s entire family was recently assaulted by a three-pronged attack that ended up with Laura Webber (Genie Francis) and Brando Corbin (Johnny Waycross) shot! Neither of them was fatally injured. But that’s only due to chance. Carly and both her son, Michael Corinthos (Chad Duell), and her daughter Josslyn Jacks (Eden McCoy), were both presents during the shootout and could have been killed. There could have been a lot more bloodshed and Sonny’s family was lucky this time.

GH Spoilers – The bullet in the backpack

In addition, someone was able to put a bullet in Dev Cerci’s (Ashton Arbab) backpack. This was done to make sure that Carly and Sonny knew that someone gets to them anytime. As viewers may recall, Carly asked Jason Morgan (Steve Burton) to let her know when it was time for her to go if necessary. In addition, she told Josslyn that her love for her kids superseded her love for Sonny.

She implied that if things began to look too dangerous, that she would take her kids and leave Sonny. Has that already happened, and is Carly just biding her time. It would seem that she would have to take the kids somewhere outside of Port Charles, but is she ready to do that?

General Hospital Spoilers – Does Carly Corinthos have a plan in motion already?

Carly is a smart woman and she loves her kids more than anything. It seems quite likely that she already has plans in motion to spirit her kids away from all the danger. But is just waiting for the right time, or is she holding on to hope that all of this can be resolved without her having to uproot her family. The next few weeks will be critical for Carly as she plans her next move.

Should Carly take her kids and leave right now? Or should she wait for Jason to tell her that it’s time? Does she already have a plan in motion? Only time will tell, so stay tuned to General Hospital airing weekdays on ABC. And don’t forget to check back here regularly for all your General Hospital news, information, and spoilers!