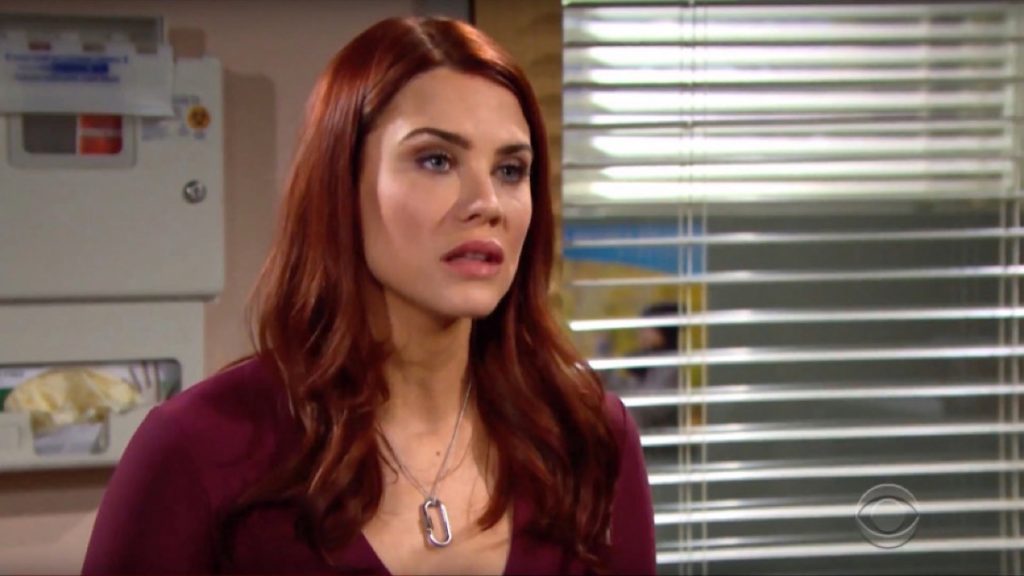 The Bold and the Beautiful spoilers reveal Sally Spectra (Courtney Hope) has been given a deadly diagnosis. She is told that her life will end in 30 days. The designer is fierce, bold and never gives up. So, why is she just accepting her death sentence? Why isn’t she getting a second opinion? Why doesn’t she look into alternative treatments? The actress explains that the redhead is still in denial.

The Bold and the Beautiful Spoilers – Sally Spectra’s Deadly Diagnosis

B&B spoilers reveal Sally finally went to the doctor about her troubling symptoms. However, she never expected to be given a deadly diagnosis. She also had no idea that her life would be cut short. At least, that is what she has been told. We are still hoping that she somehow survives.

At the time of her diagnosis, Sally was given one month to live. That’s not a lot of time. Instead of getting support from the people that care about her, Sally decided to keep her condition a secret. She told Katie Logan (Heather Tom) not to say a word. Of course, more people are finding out the truth now, but the designer still feels the need to act like everything is just fine.

The Bold and the Beautiful Spoilers – No Bucket List: Last Days Spent Working?

The Bold and the Beautiful spoilers reveal that most people have a bucket list. If they are given a certain amount of time to live, then they start doing everything they had always wanted to do. But this isn’t the case with Sally. She is just living her normal life as she did before the diagnosis. She wakes up, goes to work and spends time with Wyatt Spencer (Darin Brooks).

In the latest issue of CBS Soaps In Depth, Courtney Hope talked about the heartbreaking storyline. She indicated that Sally has always been independent. She’s used to being on her own and is being very practical about her situation. At the same time, Sally also seems to be in denial.

“I definitely feel like there’s also an aspect of denial. She’s tried so many times in her life to come out on top, but she never expected to hear this sort of diagnosis. It’s a blow.”

The Bold and the Beautiful Spoilers: Sally and Dr. Escobar Get In Explosive Fight – Sally Skipping Tests And Ignoring Health Warnings https://t.co/Uy8zc3RiDK pic.twitter.com/ZZoQuMsV9G

The Bold and the Beautiful Spoilers – Acceptance, Denial and Beating Death

It seems like there is a part of Sally that is accepting her fate. The other part of her is in denial. Perhaps she just needs more time to process what she’s been told before she goes into fighter mode. We just hope that by the end of this story, she gets her fire and determination back. We expect Sally to beat death, but it’s not going to happen if she remains complacent.