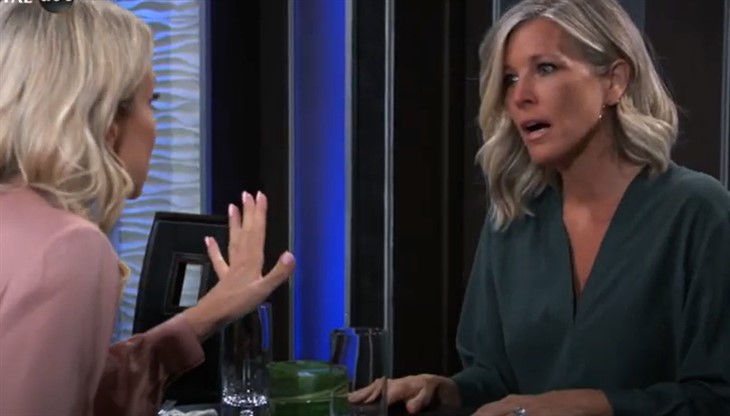 ABC General Hospital spoilers tease that Carly Corinthos (Laura Wright) will get into another argument with Port Charles’ Nina Reeves (Cynthia Watros) in an upcoming episode of GH!

Viewers will recall that Carly was very angry when Nina told her she was giving Nelle Benson Jerome (Chloe Lanier) a proper burial. Carly went from angry to livid that she was having her buried in Woodlawn Cemetery, the same place where Morgan Corinthos, (Bryan Craig) Mike Corbin, (Max Gail) and Willow Tait Corinthos’ (Katelyn MacMullen) dead baby Wiley Cooper-Jones (unknown twins) is buried.

Even when Nina told her that it would be on the other side of the cemetery Carly didn’t like it. She, like Nelle’s widower, Julian Jerome (William DeVry) felt that Nelle needed to be in the Potter’s Field in an unmarked grave. She even accused Nina of doing the good deed to make herself feel better because she related to Nelle! Even Jasper “Jax” Jacks (Ingo Rademacher) felt that Nina’s sympathy for Nelle was misplaced.

If the body she receives from the morgue indeed is Nelle’s and this isn’t a plot twist, with Nelle turning up alive at a different time, Nina would indeed be related to Nelle, not just relating to her. Every indication from the General Hospital showrunners is that Nelle really did die and that she was the long lost child that Nina has been looking for.

Carly being Carly, will she have the nerve to show up at the burial and start a fight with Nina? It would seem incredulous that she really would go that far to disrespect Nelle when Nina has already made plans. Indeed, she would be disrespecting Nina as well! When Carly told Sonny Corinthos (Maurice Benard) about Nina’s burial plans for Nelle, he was upset too.

General Hospital recaps show Nina had made a case for Wiley Corinthos (Erik and Theodore Olson) someday wanting to know about his birth mother and perhaps visit her grave. Sonny’s take was it was none of Nina’s business. If they have their way, Wiley will never know who his birth mother was! Michael Corinthos (Chad Duell) will probably feel the same way! The story will likely be that Willow is his mother, although she may object to telling the child lies when he gets older.

She will be his adoptive mother. Michael and Willow may agree on a better explanation before Wiley gets old enough to ask questions, however. Carly hated and still hates Nelle so much she will not want her buried in the same cemetery even if it is on the other side. She may even go so far as to bribe the cemetery owner to not allow Nelle to be buried in the plot that Nina has purchased! That would certainly lead to a huge argument between Carly and Nina if Nina finds out she has no place for Nelle to be buried after all!