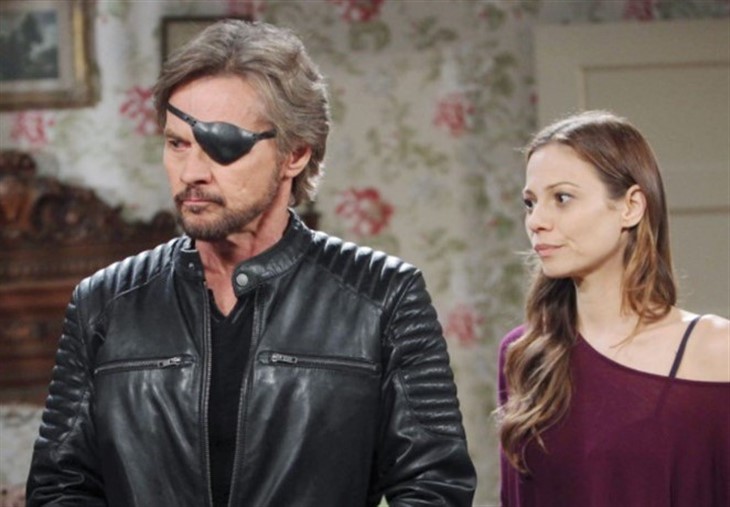 NBC Days of Our Lives (DOOL) spoilers tease that Tripp Dalton (Lucas Adams) is in a lot of trouble at the moment. With the rape allegations made against him by Allie Horton (Lindsay Arnold), Tripp has found himself without much support in Salem, other than his father Steve Johnson (Stephan Nichols). But there is someone else about to return to Salem who will likely pledge her support to Tripp. And that is Tripp’s mother, Ava Vitali (Tamara Braun).

Days Of Our Lives Spoilers – Tripp Dalton And Ava Vitali have Never Met!

As strange as it sounds, Tripp has never met his mother. Ava gave Tripp away as a baby. She and Steve later tried to find Tripp, but Ava “died”. But it seems that reports of Ava’s demise are greatly exaggerated. This is likely due once again due to Dr. Wilhelm Rolf (William Utay) and his resurrection serum. So after all the awkwardness of getting to know one another, Tripp will likely form a bond with her mother! This will be the first time they will have the opportunity to become a family of sorts!

DOOL Spoilers – In his corner!

Viewers may remember that Tripp once tried to get revenge against Kayla Brady (Mary Beth Evans) because he believed that Kayla killed Ava. It turns out the Kayla was innocent of the crime, but Tripp has already shown great devotion to his mom, even though they have never met. So once they do, they are likely to form a strong bond. Ava has long been portrayed as a villainess. But Tripp will likely bring out a softer side to the one time mobster.

The entire thing will likely but Steve in a strange situation. Kayla has already expressed doubts about Tripp’s innocence. Steve is practically the only person in Tripp’s corner. So Ava’s arrival will likely cause tension for the newly reunited Steve and Kayla over Tripp. Steve and Ava may team up to prove Tripp didn’t rape anyone, much to Kayla’s chagrin.

DOOL Spoilers – What Will Happen?

Will Tripp and Ava bond as son and mother? Will Ava provide much-needed support for Tripp during this dark time? Will Ava and Steve bond over their love of Tripp? And where will that leave Kayla? Anything can happen in Salem so stay tuned to Days of Our Lives, airing weekdays on NBC. And don’t forget to check back here regularly for all your Days of Our Lives news, information, and spoilers!