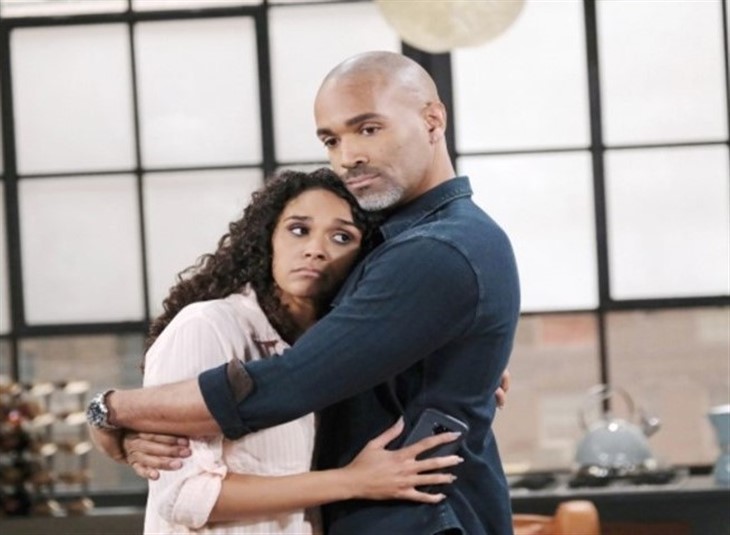 ABC General Hospital (GH) spoilers and updates tease that in Port Charles, New York Curtis Ashford (Donnell Turner) and Jordan Ashford (Brianna Nicole Henry) have already dealt with quite a bit in the course of their short marriage. From Jordan’s medical issues to money problems, the couple has battled against the odds and has so far, remained intact. But that’s because they have always told each other everything. But that’s not the case anymore. Jordan’s been keeping a huge secret, and it could very well end her marriage!

A few months ago, Marcus Taggert (Real Andrews) was injured helping to rescue his daughter, Trina Robinson (Sydney Mikayla) from Cyrus Renault’s (Jeff Kober) thugs. At first, the injuries seemed to be treatable, but it wasn’t long before Taggert succumbed to his injuries and “died”. But that wasn’t the truth. Jordan, with help of Epiphany Jones (Sonya Eddy), faked his death in order to keep Cyrus from going after Taggert’s family any longer. And it worked. Cyrus has left Trina alone ever since.

Jordan decided to keep Taggert being alive a secret from everyone, including her husband. She didn’t want her husband incriminated for her actions. But now, Jason Morgan (Steve Burton) and Sonny Corinthos (Maurice Bernard) both know the truth and it’s inevitable that before long Taggert, along with the rest of Port Charles, will discover the truth! Trina will be thrilled to see her father, but won’t understand why he let everyone believe he was dead.

Taggert’s death has impacted several people in Port Charles. Trina still hasn’t been able to find a way to move on. And his ex-wife, Portia Robinson (Brooke Kerr) has struggled to help Trina deal with her loss, as well as her own grief.

Curtis has had to face Trina’s wrath for several months now because she blames Curtis for not doing more to help Taggert. At the very least, Curtis is going to be angry that all of that was for nothing. At worst, he could leave Jordan because of her deceit. Jordan has had to make a lot of questionable choices because of Cyrus, but Curtis thought they were in it together.

Will the Taggert secret break up Curtis and Jordan. Or will this be just another obstacle for them to overcome? Anything can happen in Port Charles so stay tuned to General Hospital, airing weekdays on ABC. And don’t forget to check back here regularly for all your General Hospital news, information, and spoilers!