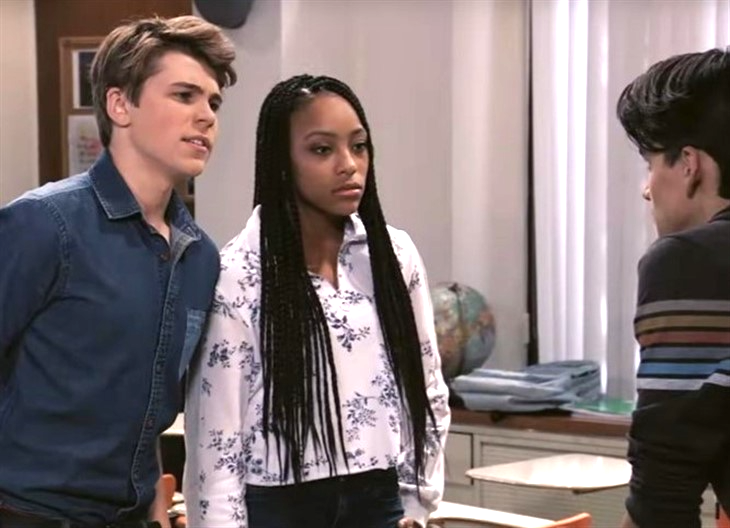 ABC General Hospital (GH) spoilers tease that Port Charles, New York Dev Cerci (Ashton Arbab) has finally decided he wants Josslyn Jacks (Eden McCoy) in a romantic sense, and he’s willing to resort to dirty tricks to get what he wants. Dev located Joss’ journal that she had finally discarded, and forged an entry that made it look like Joss was repulsed by the kiss that Joss recently shared with Cameron Webber (William Lipton).

Dev showed the fake journal entry to Cam, who was livid that Dev had read Joss’s private thoughts. But he couldn’t unsee what Dev showed him. This will likely lead Cam right into Trina Robinson’s (Sydney MiKayla’s) arms. To be fair, Cam has said he likes both girls. He’s just not sure which he wants to pursue romantically. But thanks to Dev, it seems that Cam will decide he wants Trina.

But Dev’s manipulations didn’t stop with the journal. He has been telling Joss that it’s obvious that Trina and Cam are meant to be together. Joss enjoyed the kiss the Cam and was just beginning to think that she and Cam might be a couple. But if she believes Dev’s lie, then she will likely stand aside and let Cam and Trina get together without revealing her true feelings. But that doesn’t mean that she will jump into Dev’s arms!

General Hospital Spoilers – Joss Jacks Did Like Dev Cerci At One Point!

As viewers will recall, joss tried to kiss Dev awhile back. But Dev pushed her away because at the time he didn’t know how long he would be able to stick around. He is in the country illegally, but Sonny was able to create false identification for Dev, stating that Sonny’s cousin Brando Corbin (Johnny Waycross) was actually Dev’s father and therefore, a United States citizen.

Since Sonny created false government identification papers for Dev, the young man may have a skewered sense of right and wrong. He may think the end justifies the means, and the forged journal entry is his way of emulating Sonny in order to get what he wants. And what he wants now is Joss. He may also reason that Cam and Trina already have a connection, so no harm was done.

Will Dev’s actions lead Cam and Trina to become a couple? Will Josslyn stand aside, believing that Cam never wanted her? Who will end up with whom? Anything can happen in Port Charles, so stay tuned to General Hospital, airing weekdays on ABC. And don’t forget to check back here regularly for all your General Hospital news, information, and spoilers!