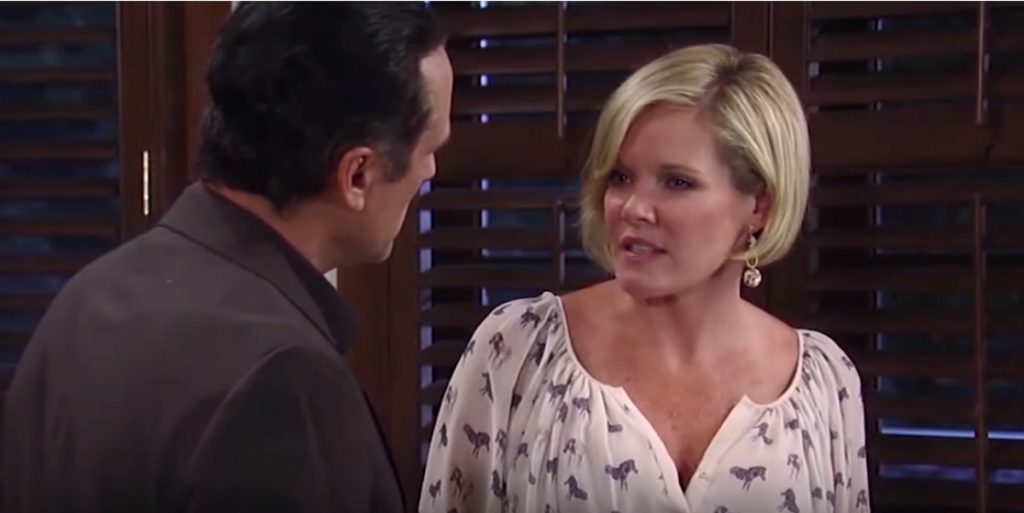 General Hospital (GH) spoilers suggest that Portia Robinson (Brook Kerr) may feel that Ava Jerome (Maura West) is a threat. Whether that’s a reasonable view is up to GH fans to decide. However, in recent episodes, Portia has made clear that there is no love lost between her and Ava.

GH fans may recall that Portia and her daughter Trina Robinson (Sydney Mikayla) were recently having lunch at the Metro Court when Carly Corinthos (Laura Wright) entered the scene. Trina got pissed over what she considered Portia’s uber controlling behavior and headed off to study with Josslyn Jacks (Eden McCoy).

Frustrated, Dr. Portia Robinson then asked Carly to sit and talk a bit. The two ladies chit-chatted back and forth about how great Trina was as a daughter and as a friend to Josslyn, but then Portia and Carly got down to business. Speaking of Trina, Portia spit out, “She’s spending more and more time over there. Everything is Ava this, Ava that. I don’t like it!”

Obviously, Dr. Portia Robinson was speaking specifically about Trina’s internship at Ava Jerome’s art gallery and the friendship her daughter seemed to have developed with Ava. Many GH viewers who saw these two have a conversation may agree that the venom and disdain in Portia’s voice concerning Ava was substantial. The question, however, is whether Portia’s animosity is justified.

Isn’t it just a bit hypocritical for Dr. Robinson to have what amounts to a freaky obsession with Trina’s boss, but have no problem whatsoever with the parents of her daughter’s best friend? GH fans ought to consider the fact that Portia apparently gives a free pass to the Corinthos family despite their ties to the mafia. Worse, enemies of Sonny Corinthos (Maurice Benard) kidnapped Trina and held her hostage! Not to mention, Portia’s ex-husband Marcus Taggert (Réal Andrews) was killed.

Portia went on and on about Ava Jerome’s nature. In fact, Dr. Portia Robinson stated flatly that she didn’t like anything she’s read about Ava Jerome and she didn’t want Trina to have anything to do with her! Yet, there are armed guards all around the Corinthos estate and even Josslyn is looking for an exit from that situation. How blind can Portia be at this point? It’s a fair bet that a lot of GH viewers may be asking themselves whether Portia’s lost all grip on reality.

After all, what sane mother would dismiss the dangers that surround the Corinthos’s but allow herself to be utterly consumed with what appears to be jealousy? Is it possible that Portia isn’t really all that concerned about safety? Maybe Trina’s mother is more disturbed by the fact that she hasn’t been ultra-close to her daughter. She wasn’t there for Trina. The truth is, she wasn’t even living in the same city when Trina was kidnapped!

Could it be that Portia feels guilty?

Many GH viewers at this point may agree that guilt seems a much more likely motivation for Portia’s attack on Ava. Remember that she aggressively let the woman know that she was Trina’s mother … and Ava was not. Fans just might agree that this looked and sounded just like guilt.

The question now is whether Portia will be able to get her head on straight, or whether she’ll allow herself to be consumed with trivialities while Trina just gets more and more emotionally distant.