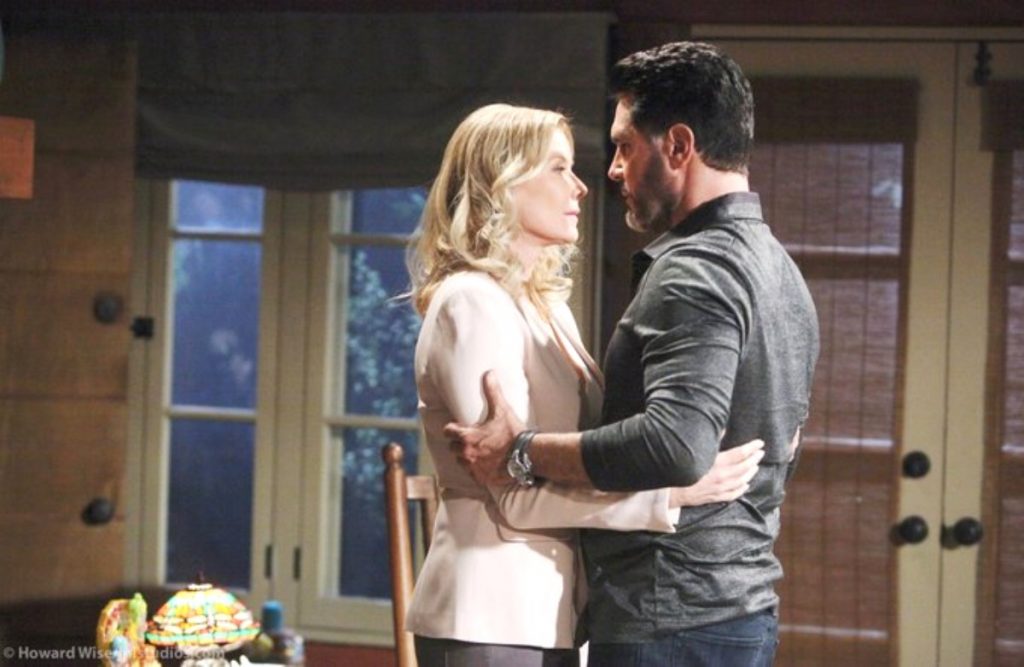 The Bold and the Beautiful spoilers reveal that Bill Spencer (Don Diamont) and Brooke Logan Forrester (Katherine Kelly Lang) are exposed to the “Bridge” reunion party. Their kiss was filmed, then played for the party guests. Obviously, “Brill” didn’t learn anything. The two end up kissing again, but this time it’s Donna Logan (Jennifer Gareis) who sees it. Once again, Katie Logan (Heather Tom) is betrayed.

The Bold and the Beautiful Spoilers – Bill Spencer Can’t Resist

B&B spoilers reveal that Bill has a problem being completely committed to one woman. However, it appeared that he was working on becoming a better man. Fans will just have to accept that some people never change, especially if they happen to be “Dollar Bill.”

When it comes to Brooke, he can’t seem to resist getting close to her. It seems that one kiss wasn’t enough. Despite being exposed to the “Bridge” reunion party in front of everyone, he will kiss his former flame once again.

It is suggested that at the reunion party, “Bridge” ironically breaks up again. Of course, this is just a knee-jerk reaction to watching the “Brill” kissing video. After all, Ridge and Brooke were not back together when the forbidden smooch happened.

It is speculated that Brooke kisses Bill thinking that her marriage to Ridge is over. However, their romance is a rollercoaster. She will realize that she has once again made a mistake by allowing Bill to kiss her. What will probably happen is Brooke reconciles with her hubby yet again. But could he end up finding out that there was another “Brill” kiss? It certainly sounds like that is the way this story is going.

The Bold and the Beautiful Spoilers – Donna Logan Stunned By ‘Brill’

The Bold and the Beautiful spoilers reveal Donna is stunned when she witnesses Bill and Brooke kissing. Now, she didn’t see it when the two were at Hope Logan’s (Annika Noelle) home. So, this means that there is indeed another smooch between the former flames. But how will Donna react to one sister betraying the other?

The Bold and the Beautiful Spoilers: Thomas Gets Desperate – Planning To Kidnap Douglas https://t.co/6WlGuTGnSC pic.twitter.com/B13HWcKNqY

It is only a matter of time before Katie discovers Bill once again locked lips with another woman. She most likely forgave him the first time. However, when she learns that her sister betrayed her for the second time, it might be a different story. Not only will she think about ending her relationship with Bill, but she will react to Brooke’s betrayal. Could this sever the sisterly bond forever?