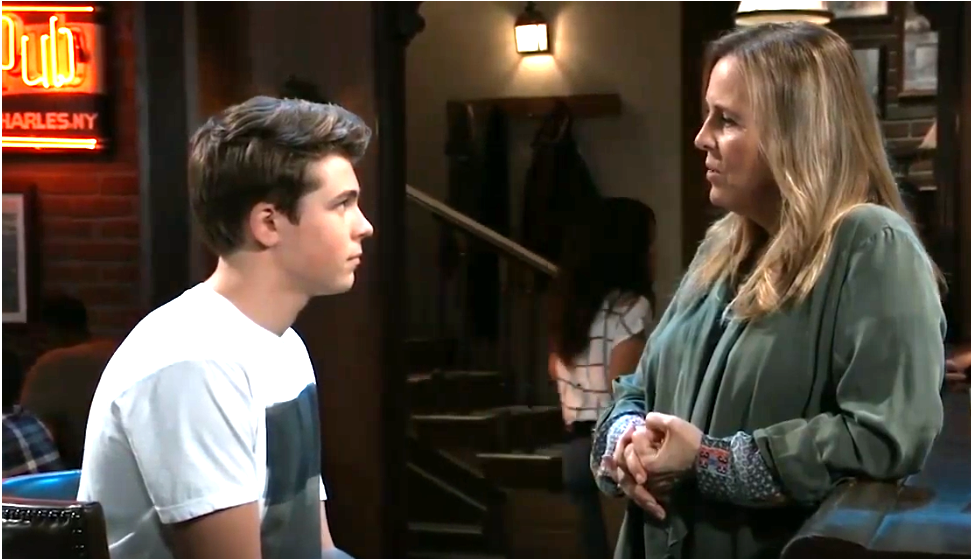 General Hospital spoilers tease that Laura Collins (Genie Francis) will cross Josslyn Jacks (Eden McCoy) when she tells her to give Cameron Webber (William Lipton) some space in an upcoming episode of GH!

There is something definitely going on with Joss lately and it’s not real good – it’s understandable that she would arrive at Marcus Taggert’s (Réal Andrews) funeral sad and forlorn, and it was good that she could provide empathy for Trina Robinson (Sydney Mikayla) who had often helped her, as had Cameron, through her grief over Oscar Nero Quartermaine ( Garren Lake Stitt).

Perhaps this funeral all too much brought back all her grief over Oscar. But Cameron was deeply affected as well – not just because of what happened to Trina’s dad, but he is having problems with blaming himself, and nightmares, and quite possibly the cumulative effect of this kidnapping by Cyrus Renault’s (Jeff Kober) henchmen and his own kidnapping by Shiloh Archer (Coby Ryan McLaughlin) which his stepfather, Franco Baldwin (Roger Howarth) rescued him from, and then the fear that Franco may never return to himself has built up in Cameron and given him a case of post-traumatic stress disorder!

Laura knows that Cameron is not trying to avoid Joss, but he has his own issues to deal with and cannot be “strong for” either Trina or Josslyn right now. And, apparently, Josslyn is going to Cameron to lean on when he just simply is not “learnable!” Carly Corinthos (Laura Wright) has spoken with her daughter as well, noticing something is not right and she told her in a recent General Hospital episode that they are going to have to see what it looks like going forward.

Josslyn will not like Laura, who is Cameron’s maternal grandmother by adoption telling her what to do or how to behave around Cameron or anyone else. She probably won’t think it is any of Laura’s business, and may react badly – she may even open her mouth and have her mother come out, and everyone knows how Carly is when she’s upset!

Oscar has been gone for nearly a year now, but the first anniversary of his death will come in only a couple of months so maybe this could be affecting her, and normally Laura is pretty understanding and gentle, but it sounds like Joss may say something uncalled for or give her attitude.

Josslyn will possibly feel defensive because deep down, she knows Laura is right and that Josslyn is not only being rude by trying to lean on Cameron for her issues, but trying to help her with hers when he is overwhelmed with his own will simply make things worse, and more difficult for Cameron. One person, and especially a teenage one, cannot handle but so much stress emotionally, and trying to handle someone else’s at the same time just won’t have a good outcome for either of them!