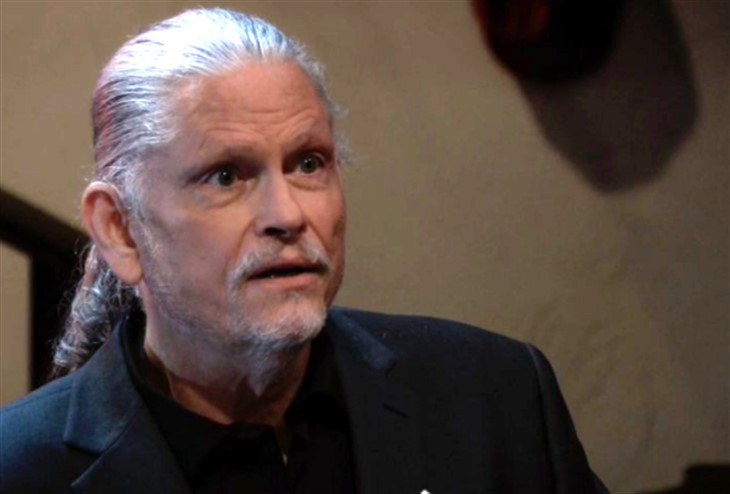 General Hospital spoilers and rumors tease that in Genoa City, Wisconsin Cyrus Renault (Jeff Kober) and Cassandra Pierce (Jessica Tuck) maybe brother and sister, and she could be the mystery person he’s been caring for in the house on Wilson Street in Astoria, Oregon!

Any General Hospital fan who looks for spoilers and spoilers stories undoubtedly has seen a lot of different speculation relating to Cyrus and his mystery guest. There is also a lot of speculation as to if the guest is tied to the forty-something-year-old case file he requested from Port Charles Police Commissioner Jordan Ashford (Briana Nicole Henry).

The two situations may or may not be related. It all depends on the case the file relates to and whether Cyrus is related to someone mentioned in the file. Considering the “buzz” on the net seems to confirm from different sources that Cyrus’ guest is someone who is now presumed dead, there is one person who makes a lot of sense – Cassandra Pierce (Jessica Tuck)! We know it cannot be Nelle Benson Jerome (Chloe Lanier), not because she may not be the person in her grave, but because Curtis Ashford (Donnell Turner) knew Cyrus was protecting someone in the house on Wilson Street in Astoria, Oregon before Nelle fell off the cliff.

We can also deduce that the person needed oxygen and medications and that the person was female since Cyrus signed the partial letter that Curtis found in the fireplace with “love, Cyrus.” It is possible that it was a girlfriend or heretofore unknown wife there, but it could also be a letter from a brother to a sister. The biggest clue that Cassandra and Cyrus are connected is not the white hair they have in common or a resemblance to each other. The biggest clue is that they were both drug lords with large scale cartels. Cassandra also has drug manufacturing companies, and that might be where Cyrus gets the drugs he runs!

Cassandra Pierce was presumed killed by Valentin Cassadine (James Patrick Stuart) when he blew up her rescue boat shortly after she had kidnapped his daughter, Charlotte Cassadine (Scarlett Fernandez). Even though Valentin knew Cassandra and even dated her back in his mercenary days, it was the last straw when she endangered his daughter! He provided a booby-trapped rescue boat for her escape. Cassandra has neither been heard nor seen since.

During that time, Cyrus was still in prison in the Northwest; if she is his sister, and she was somehow found clinging to life, he may have been her only living relative and he could have been contacted in the prison. He could have had his henchmen retrieve her and have had been hiding her out and paying someone to give her specialized care all this time. General Hospital viewers will recall also, that shortly after Neil Byrne’s (Joe Flanigan) death, Cyrus was seen calling someone to find out who supplied the drug that killed him, because he knew he didn’t. It is quite possible that by the time Curtis, Jordan, and Laura Collins (Genie Francis) reached the house where she was, that she wasn’t moved – she had survived and left on her own.

She would have known to try and get rid of any evidence she was there and also tried to destroy any evidence tying her to Cyrus. It could be that she is the one who supplied that drug and the two may have gotten back in touch by the time Cyrus tried his new and improved version of cocaine on Sasha Gilmore (Sofia Mattsson) that gave her a heart attack. That might have come from Cassandra, or at the very least one of her manufacturers! It’s an awfully big coincidence that Cassandra, too, tried to kill Sasha – by injecting her food with bird flu!

Are Cyrus And Cassandra Tied To The Forty Plus Year Old Case?

Are both Cyrus and Cassandra tied to the forty-plus-year-old case? Possibly – it is a case involving Laura Spencer and something she did when she was “a kid”. Scott Baldwin (Kim Shriner) was involved also. Some theories state it could be the old David Hamilton (Jerry Ayres) case – while Laura could not be tried again in that case, Cyrus could use it to get Laura fired as mayor. That really doesn’t tie him and Cassandra to the case file, however.

There is another old case that Laura could be prosecuted for – the one that Rick Webber (Chris Robinson) and Scott covered up – and buried the evidence in the back yard. Both Scott and Laura could be prosecuted for the murder of Theresa Carter (Alicia Arden), and Scott could be prosecuted in the murder of Rick Webber as well, but that case is not old enough to be in that redacted file. In the original historical storyline, David Hamilton was a widower whose wife and two children died in the wreckage of their home, which apparently was destroyed with them in some manner.

Now, GH could rewrite history as they did in the Kendra Bauer/Lennon (Michelle Argyris) storyline where she came to town wanting revenge on Alexis Davis (Nancy Lee Grahn) for killing her brother, Kiefer Bauer (Christian Alexander). They could make Cyrus and Cassandra the two now-adult children of the late David Hamilton, with Cyrus having done the research as to who might have killed their father and came up with Laura! Time will tell!