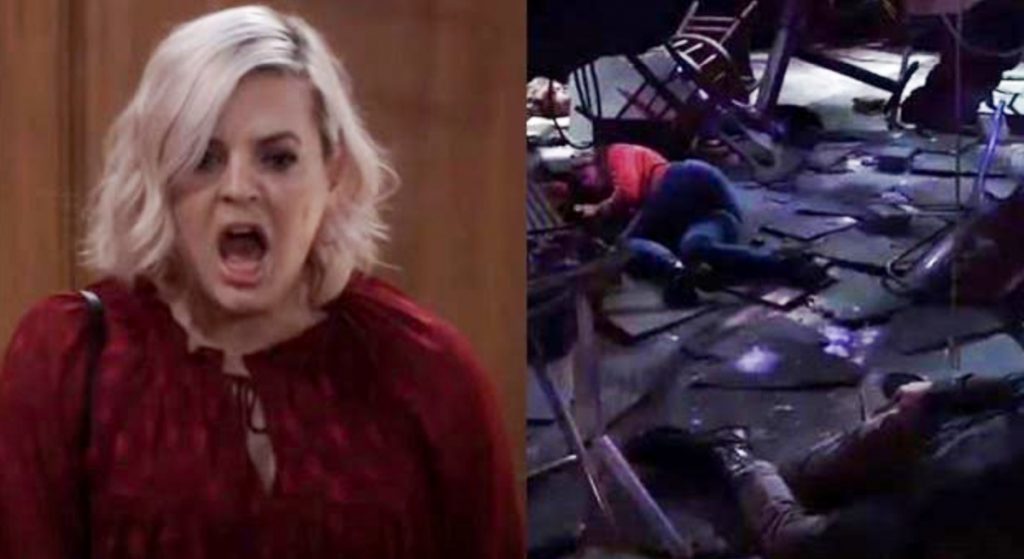 General Hospital spoilers and updates tease that in Port Charles, NY. Maxie Jones (Kirsten Storms) will go be looking for Mac Scorpio (John J. York) when she hears about the explosion of his and her mother Felicia Scorpio’s (Kristina Wagner) restaurant, the Floating Rib! She will be worried that her dad could have been at work and a victim of the explosion!

Maxie knew her mom would not be working at the Floating Rib because Maxie and Peter August (Wes Ramsey) had planned on dinner out and Felicia had baby James West (Owen and Curtis Rufca). Peter was taking out his frustrations on the punching bag at Volonino’s Gym and had missed their dinner date. Maxie was understanding but was worried about what was bothering him so much. He told her as publisher and chief editor of The Invader, he gets all the frontline news and was worried about the crime spree in Port Charles, and in particular the brewing mob wars. Peter, too does not trust Cyrus Renault (Jeff Kober) and he’s known worse than Renault in his time – and he’s no upstanding citizen himself!

It takes a crook to know a crook, although like Sonny Corinthos, (Maurice Benard) Peter would never have anything to do with drug running! But Peter has no idea of the headlines he’ll have to write himself once he finds out about the explosion! General Hospital viewers know that both Maxie and Peter will have much more than just Mac to worry about, and Peter may show up there as well when he can’t reach Lulu Spencer (Emme Rylan) to tell her to cover the story!

Every indication is that Maxie will go to the Floating Rib in person to look for Mac, and Peter may very well be the one who tells her what happened. Spoilers don’t say he will go over but it would not be surprising if he did. He would want to support Maxie in case her stepfather is injured or worse. In fact, Mac will head Laura Collins (Genie Francis) off and keep her from rushing in to look for Lulu, who is likely either dead or comatose, crushed under heavy rubble. Mac as the owner will be notified when Dante Falconeri (Dominic Zamprogna) calls 911, and if not, as the Chief Of Police he may hear it on the scanner at the PCPD anyway and rush over!

In general, when there is a disaster such as this, even though civilian citizens many times do pitch in and try to help first responders if there is evidence of a crime, police will want them to not contaminate the crime scene! Mac knows this had to be a deliberate act because as the owner of the Floating Rib he knows he keeps everything up to snuff such as electrical wiring, etc., to keep his health and building inspections up to date! While Maxie will be relieved to know Mac was not inside when the building exploded, she will definitely be blindsided and heartbroken when she hears of Lulu’s fate!