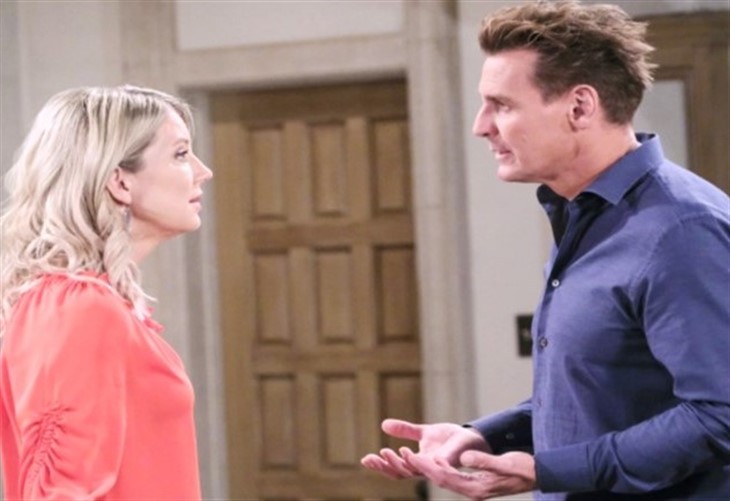 General Hospital (GH) spoilers tease that in Port Charles, NY Nina Reeves (Cynthia Watros) finally has some answers after her long-missing daughter. After discovering that she did indeed give birth to a healthy daughter, Nina was heartbroken to know that the baby was given to a family in Florida. But what Nina doesn’t know is that Carly Corinthos (Laura Wright) found the half heart pendant and realized that Nelle Benson (Chloe Lanier) was the girl that Nina had been searching for.

Nelle died after falling over a cliff, but not before leaving the pendant behind. Carly had heard Nina say that her daughter had the other half, so it wasn’t long before Carly pieced the clues together. She immediately told Jasper “Jax” Jacks (Ingo Rademacher) what she had discovered but warned Jax that Nina could never know. Jax reluctantly agreed, but as with all secrets in Port Charles, this one will eventually come out. And it seems unlikely that Nina and Jax’s relationship will remain intact after it does.

As viewers know, when Nina was with Valentin Cassadine (James Patrick Stuart), Valentin had hired Sasha Gilmore (Sofia Mattsson) to pose as Nina’s daughter. Sasha and Nina grew close and it was devastating when Nina discovered that the man she loved had deceived her about her child. Nina and Valentin broke up right before they were to exchange vows. She couldn’t forgive Valentin for the deception so there’s no reason to believe that Jax will fare any better.

Before Nelle died, Nina felt close to the young woman in some ways. She tried to offer advice and support to Nelle, but Nelle wanted revenge against Carly so badly that she wasn’t interested in Nina’s advice. Nina eventually testified against Nelle in the custody hearing for Wiley Corinthos (Erik & Theo Olsen) and Nelle was furious. Nevertheless, after Nelle died, Nina paid for Nelle’s funeral service and headstone. Once she finds out that Nelle is her daughter and that Jax is keeping that from Nina, she will likely kick him to the curb just as she did with Valentin.

When will Nina find out the truth about Nelle? Will she leave Jax once she knows he kept the truth from her. Is Nelle really and truly dead? Exciting times are coming to Port Charles, so stay tuned to General Hospital airs weekdays on ABC. And don’t forget to check back here regularly for all your General Hospital news, information, and spoiler!