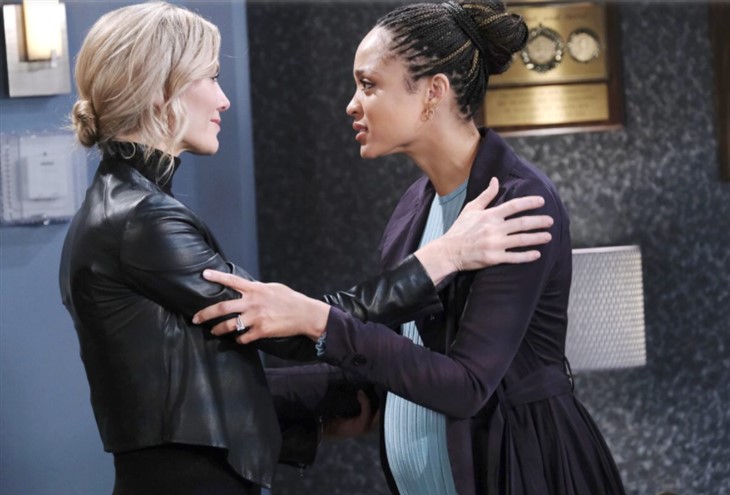 NBC Days of our Lives spoilers reveal that in Salem one of the oddest ever soap friendships is unfolding in Salem. It’s between lawbreaker Kristen DiMera (Stacy Haiduk) and law enforcer Lani Price (Sal Stowers). What do these two very different women have in common? Not much outside the nunnery. That’s right, you read that correctly, these two bonded when they were initiates to the church.

The action took place offscreen during the Lost Year. That’s when the show jumped forward a year in time and all sorts of shenanigans took place that we’re still finding out about. Like Jack Deveraux (Matthew Ashford) sleeping with Kate Roberts (Lauren Koslow) while his wife Jennifer Devereaux (Cady McClain) was in a coma!

Lani’s husband and fellow cop Eli Grant (Lamon Archey) can’t wrap his head around why in the world Lani has risked a lot to be friends with a criminal who is hated by half the town. And yet they are BFF’s who have each others’ backs no matter what.

Right now Kristen is back in jail because of Lani. Not because Lani put her there but because she willingly went so that Lani wouldn’t have to.

Sal recently talks about this situation to Soap Opera Digest. The reality is that Eli blackmailed Kristen and Lani just found out about it. Lani kicked Eli out of the house and then went to see her friend. Sal says that emotions were running high but Kristen surprised her by what she said.

Days Of Our Lives spoilers – Will Elani Reunite In Salem?

According to Sal, Kristen just turns it all around in Lani’s face and is like, “don’t let me have sacrificed everything for you to throw away your entire marriage and your family.”

In other words, Kristen’s bottom lined her friend with a hard reality check. Sal says that both characters are unhappy, but Lani can find happiness at Kristen’s expense. This causes conflicting emotions in her and she wants to be happy and raise her twins with Eli but at the same time feels enormously guilty about it. What will Lani do after Kristen drops a truth bomb on her? Will she heed her friend’s advice or be stubborn and keep Eli shut out of her life?