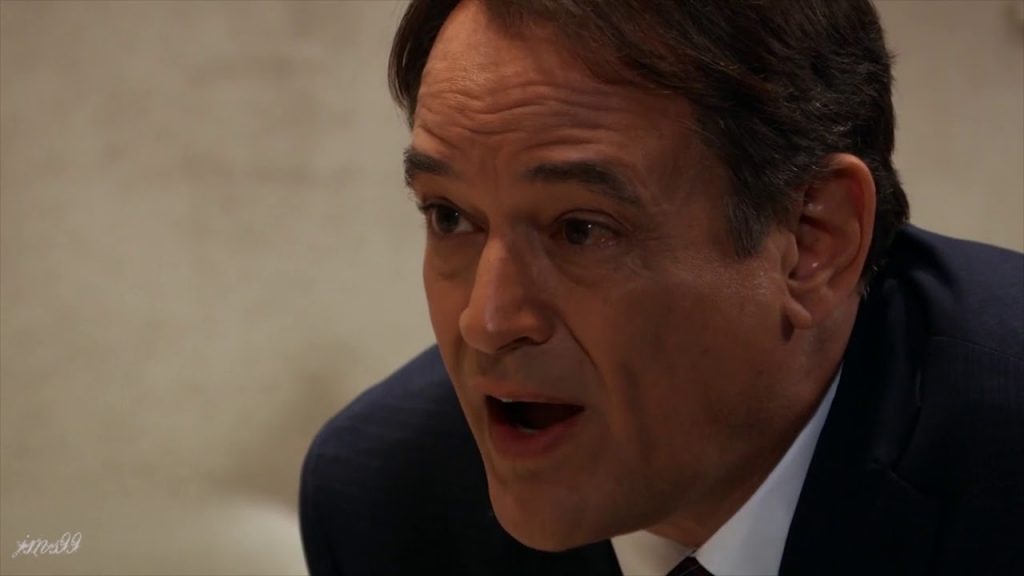 General Hospital spoilers tease that the answer to Port Charles’ mob war problems might already be in the perfect place – Pentonville Prison! Will Ryan Chamberlain (Jon Lindstrom) offer his services to eliminate Cyrus Renault (Jeff Kober) in exchange for an early release?

General Hospital viewers will recall the reign of terror that Ryan Chamberlain held over Port Charles not once, but twice – in the mid-1990s and in 2018. Trickery had to be employed by General Hospital personnel to get Ryan into Pentonville by a forced kidney donation to save the life of Police Commissioner Jordan Ashford (Briana Nicole Henry), and transporting Ryan, unconscious into Pentonville’s infirmary where he then was moved into a cell. He has killed one inmate already, which should have put him in solitary but apparently hasn’t, since Nelle Benson Archer (Chloe Lanier) had been able to talk to him since that time! Ryan keeps up with the Port Charles news and may have seen the attacks on Sonny Corinthos’ (Maurice Benard) family and the other crimes picking up in Port Charles and figure there’s a new mobster in town.

Ryan’s only friend, Nelle, hasn’t been in contact with him since she got early parole, so he might be a little more sociable in the prison lunch room than he usually would be – and he might find out that Sonny’s been visiting a certain new prisoner, and put two and two together. Why shouldn’t Ryan, disabled with only one kidney and only one hand get early parole too?

He might offer to assassinate Port Charles’ new Public Enemy Number One if he gets early parole for it! He might suggest house arrest with an ankle monitor – after all, how is he going to cut off an ankle monitor with only one hand? He’d slice through his ankle in the process because he wouldn’t have that other hand to hold the monitor from shifting – or that would be his story! He knows he couldn’t just get an early parole without some catch to it, with all his murders!

Who’s more dangerous? Cyrus running his mob and causing all kinds of mass casualties from behind bars, or Ryan loose again? Ryan only kills one at a time, Cyrus has enough goons that they could shoot, bomb, or otherwise cause mass casualties! It is truly a case of which man is the lesser of two evils! Ryan loose could assassinate all of Cyrus’ goons too and slip in and out unnoticed – how he did that was never revealed. Maybe he just finds the nearest manhole and uses the sewers or accesses the tunnels that run under Port Charles! Come to think of it, Ryan has never even come to his trial, has he? If he did it must have been offscreen! The courts may be backed up but he’s been in Pentonville for over a year now! It’s doubtful that the legal powers that be would turn Ryan loose even if he gives them a deal like that, assassinating Cyrus on the inside and his goons once he’s on the outside – but it may be a tempting offer!