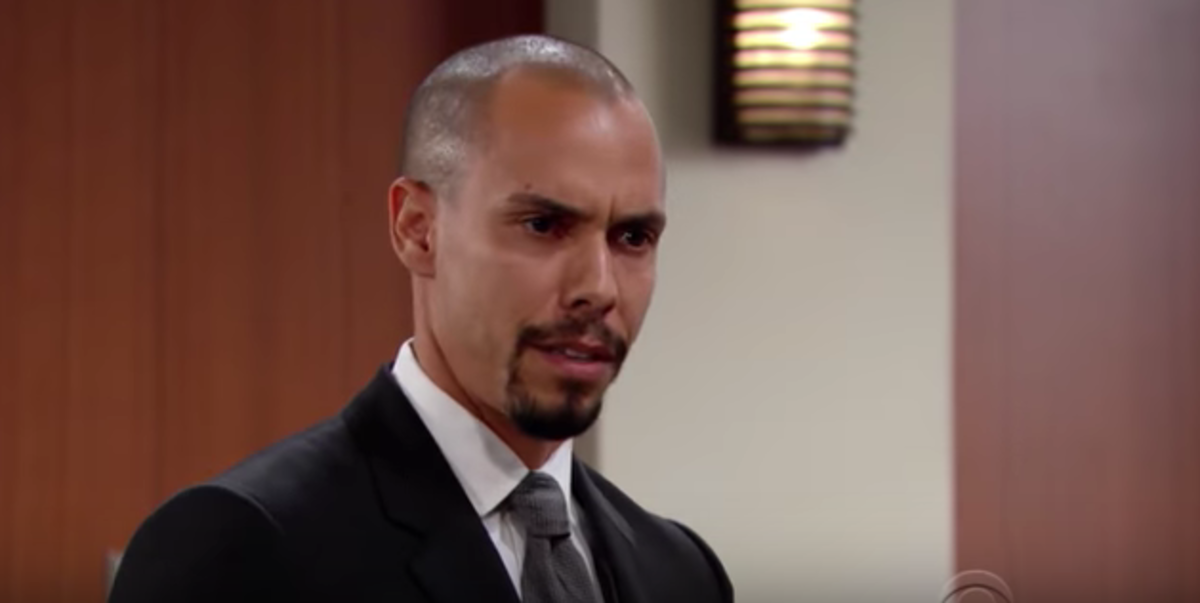 The Young and the Restless (Y&R) spoilers for Thursday, February 27, tease Devon Hamilton (Bryton James) has a big surprise headed his way.

At Crimson Lights, Devon receives a mysterious text. He sees that it’s from an unknown caller and contains a string of numbers.

At the Grand Phoenix, Abby Newman (Melissa Ordway) grumbles about all the lawsuit drama. She tells Chance Chancellor (Donny Boaz) she believes Phyllis Summers (Michelle Stafford) is responsible. Abby thinks it’s appalling for Phyllis to do something like this while Victoria Newman Amelia Heinle) is in the hospital.

Soon after, Chance is called to the coffeehouse for a meeting. Devon believes the text is from Colin, so Chance ponders it with him. Since Kevin Fisher (Greg Rikaart) is nearby, they recruit him to help crack the code. Once Kevin types on his laptop, he figures out that it’s for an offshore bank account. Kevin’s shocked to see it’s got $2.475 billion in it and is in Devon’s name.

Devon receives another message, which appears to be from an apologetic Colin. Although Devon’s baffled by the change of heart, Kevin doesn’t see why he should care. What’s important is that Devon got his money back.

Later, Devon shows up with Chance and Kevin. They bring Jill up to speed on Colin returning the money, but she insists she won’t forgive him. Chance is floored to find out Devon simply wants to let Colin go. However, Devon points out that his life is good. Colin’s alone and broke, so he’s suffered enough in Devon’s opinion.

The Young and the Restless Spoilers – Devon Hamilton Has Great News

After Devon takes off, Kevin’s perplexed since he figured Devon would be happier. Chloe and Kevin exit, which leaves Jill to chat with Chance. He doesn’t get what she ever saw in Colin, but she acknowledges how alive she felt when she was with him. Chance takes off before Jill gets a special delivery. After she opens the box, she pulls out a red rose and gives it a sniff.

At Society, Nate Hastings (Sean Dominic) catches up with Elena Dawson (Brytni Sarpy). Once clinic plans are brought up, Nate and Elena gush about how much they value their friendship. They settle on the topic of missing Colin and how Devon perhaps feels like he’s let Katherine Chancellor (Jeanne Cooper).

Devon eventually arrives with fantastic news. Nate and Elena are both over the moon about the return of Devon’s fortune. Once Nate takes off, Devon opens up to Elena about Colin’s second text. It really struck a chord with him and was about how money can make you crazy. Elena protests that never happened with Devon, but he wants to concentrate on handling his money more efficiently.

At the hospital, Nikki Newman (Melody Thomas Scott) visits Victoria’s bedside and encourages her to wake up. After Nikki exits, Billy pops in again and pushes Victoria to be strong. He urges Victoria to pull through this and declares his love. Victoria opens her eyes, so a pleased Billy assures her that he’s right there. He’s taken aback when Victoria tells him to get away from her.

Nikki appears to settle Victoria down and stares at Billy angrily. She later corners Billy outside and makes it clear that he shouldn’t be there. Billy protests, but Nikki thinks he belongs in therapy or a meeting. She’s fed up with Billy being in denial about his problems.

Victoria asks for her mom, so Nikki returns to her beside and insists Billy won’t reenter the room. She wants Victoria to just focus on getting better now. Back at the Grand Phoenix, Abby deals with another round of drama over the phone. She’s facing another lawsuit, so she gripes to her lawyer and insists the hotel is cursed.

The Young and the Restless spoilers say some great scenes are on the way. We’ll give you updates as other Y&R details emerge. Stay tuned to see what else is brewing in Genoa City.