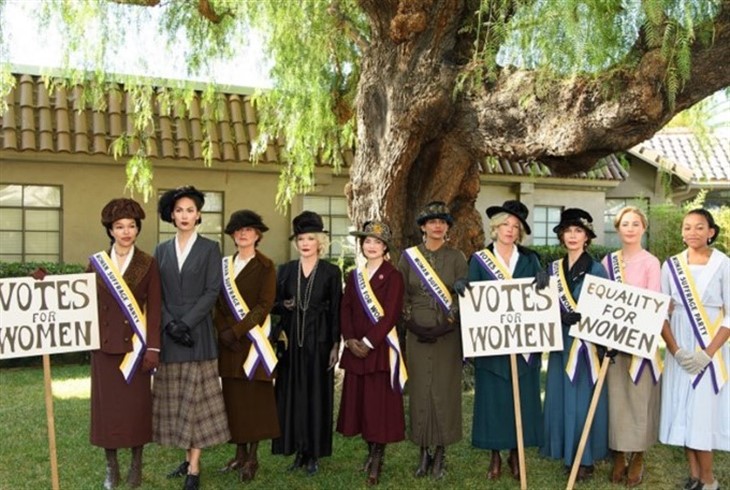 ABC General Hospital spoilers and updates reveal that the show will school viewers prior to the 2020 United States presidential election on Tuesday, November 3, 2020. The presidential election has been called many things by many commentators and women-and-men-in-the-street, including historic. And it may be just that as British Prince Harry, and his American wife Meghan Markle has been accused of the first time in history by a US congressman of interfering in the race!

Back to reel life, GH intends to mirror real life when it airs a special voting-themed episode Alexuson November 2, 2020. Here’s what we know so far.

This year is the 100th anniversary of the passage of the 19th amendment which gave women in this country the right to vote. In the November 2 episode, it’s Election Day in Port Charles and Josslyn Jacks (Eden McCoy) learns about her great-great-grandmother. We assume this is a springboard to go back in time for the cast as the show has released a pic of several characters in period costume with signs about women and voting.

General Hospital Spoilers – What Happens Next In Port Charles, NY?

The episode promises to be unique and thought-provoking and a respite from the current storylines. In particular, Carly is in hot water over her part in Nelle Benson’s (Chloe Lanier) death. An out of state detective wants to pin a murder rap on her but will Nelle suddenly reappear on Halloween to thwart that action? Or perhaps she will stay “dead” to ruin Carly’s life? That’s assuming that the vixen is actually alive, which many fans are certain of!

Speaking of Halloween, the show will air a special scary episode on Thursday, October 29 that promises to be spooktacular. Someone is following the teens as they set off for a party and it could spell danger for one or more of them!