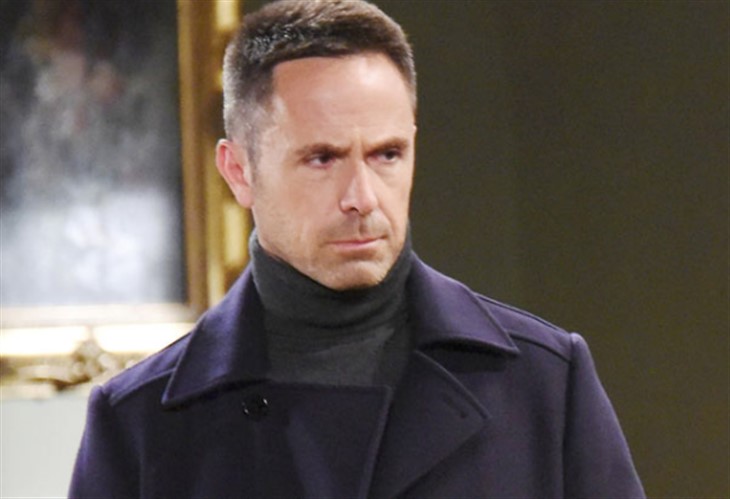 ABC General Hospital spoilers tease that in Port Charles, New York Julian Jerome (William DeVry) will soon get a threatening postcard; might it be from Ryan Chamberlain (Jon Lindstrom)?

General Hospital viewers will recall that Ryan Chamberlain has a letter from Nelle Benson Jerome (Chloe Lanier), stating that Julian was complicit in keeping the true identity of “Wiley Cooper-Jones” a secret. “Wiley Cooper-Jones” was the baby that Lucas Jones (Ryan Carnes) and Brad Cooper (Parry Shen) adopted who died.

Lucas met the real baby, who was Willow Tait Corinthos’ (Katelyn MacMullen) child with Shiloh Archer (Coby Ryan McLaughlin) but didn’t get to know him. The baby died only a day or so old, and Brad didn’t know what to do. He went for a drive with the dead baby in the backseat of his car and came across Nelle, who had just given birth to the child now known as Wiley Corinthos (Erik and Theodore Olson). He stopped, and Nelle offered to swap babies. She didn’t want the Corinthos family to get the baby so when she was brought to General Hospital, she was holding the dead baby who she told Michael Corinthos (Chad Duell) was theirs.

When the baby was nearly a year old, and Brad and Lucas were starting to have marriage trouble, Brad’s guilty conscience spurred him to confess what had happened to Julian! Julian and Sonny Corinthos (Maurice Benard) have mob enemy history going back many years. The last thing Julian wants is for Sonny to know that he knew Wiley was Michael’s for that long without telling anyone! But if his sister Ava Jerome Cassadine (Maura West) doesn’t divorce Nikolas Cassadine (Marcus Coloma) and give her heart back to Ryan, he’ll send the letter to Sonny!

Ava, on the other hand, thinks she can pull one over on Ryan! Perhaps she thinks she can fake divorce and bring falsified papers to Ryan and he’ll fall on it. She doesn’t know who she’s messing with if she tries that! He didn’t avoid being discovered alive for over twenty-five years and evade capture for his many murders by being stupid! Of course, the DVX helped a lot with his cover – it was never revealed exactly what Ryan did for the DVX but there is an excellent possibility that he worked as an assassin.

The postcard that Julian receives, if it is from Ryan, will probably refer to the threat of sending Nelle’s letter to Sonny! Since the last time Ava went to visit Ryan, Nikolas followed her, it is likely she has not been back again to see him, still trying to come up with a plan to protect Julian but not have to deal with Ryan, or try to deal with Ryan on her own leaving Nikolas out of it if possible. Julian is going to have to have another talk with his sister, and tell her about the postcard, and maybe bring Nikolas in to work together on a plan!

Stay tuned to GH, and keep checking General Hospital spoilers frequently, for all the latest news, updates, and developments!