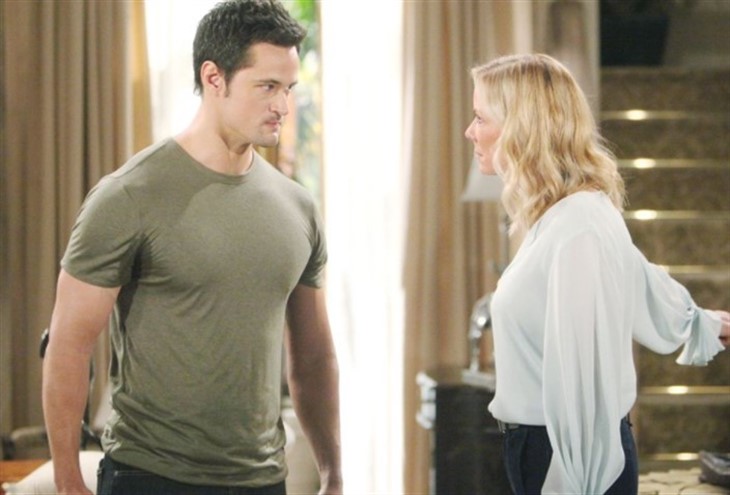 CBS The Bold and The Beautiful spoilers tease that in Los Angeles Brooke Logan Forrester (Katherine Kelly Lang) will soon return to her suspicious ways where is concerned!

The Bold And The Beautiful Spoilers -Thomas Forrester Has Been Working Hard To Reform Himself, Brooke Logan Won’t Believe He Has Changed

Thomas has been a little upset that Zende Forrester (Delon De Metz) was hired to work for “Hope For The Future” instead of him, but apparently, Hope Logan Forrester (Annika Noelle) is giving Thomas some work anyway. Brooke becomes concerned over some designs he’s drawn for Hope and reads untoward ulterior motives into them! Hope is the one who reveals the designs, so it’s not like he’s drawn some sicko perverted portraits of her in the dresses and wrapped them up in pretty paper and a bow!

But that is how Brooke will see them! Brooke will point out things in the designs and point out that Thomas is now around Hope all the time, either at the cabin with Douglas or at Forrester Creations! Brooke is all worked up over perceiving previous patterns that Thomas had displayed. Thomas, although he was jealous of Zende and intimidated by him, it was only because he wanted to come back to work and felt like Zende was a competition too fierce for him.

He has told how he’s been working on himself and working with his mother, who is a psychiatrist. He has been protective over his sister Steffy Forrester (Jacqueline Macinnes Wood) and has checked out Dr. John Finnegan (Tanner Novlan) and made sure he wasn’t a bad guy. It doesn’t sound like Thomas is returning to his obsessions over Hope, but Brooke will never trust him or give him a chance!

It sounds more like BROOKE is the one returning to previous patterns! If she doesn’t quit being suspicious of Thomas and accusing him of obsessing over Hope, she may be driving a nail into her own marriage coffin! That was a big part of why Ridge Forrester (Thorsten Kaye) separated from her to begin with – her distrust of her son and her refusal to give him the benefit of the doubt!

Of course, this last time she was proven right – but in that case, Steffy saw the problem too and supported the plan to save Hope from Thomas. He was thoroughly exposed and embarrassed at the would-be wedding to Zoe Buckingham, (Kiara Barnes) who he also recently apologized to. Brooke seems to have been proven right about many things that others thought she was wrong about in the past, however.

One recent example is Quinn Forrester (Rena Sofer) and her friend Shauna Fulton (Denise Richards) conspiring to break Brooke and Ridge up and faking Ridge and Shauna’s marriage! Brooke will have to be very careful not to blow things out of proportion to Ridge, as he has come to trust his son again and he would not take “Thomas paranoia” well!