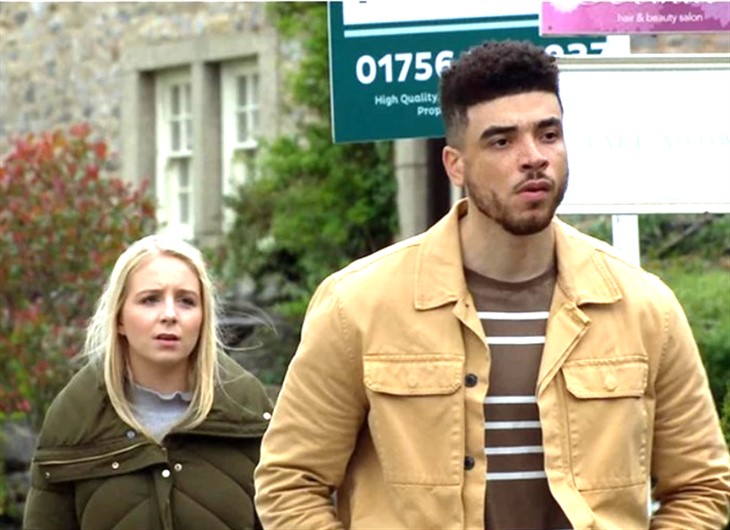 ITV Emmerdale spoilers reveal that Nate Robinson (Jurell Carter) offers to make a huge sacrifice to save Belle Dingle (Eden Taylor-Draper). Convinced that she’s going to prison for Moira Dingle’s (Natalie J. Robb) hit-and-run, Nate plans on confessing. He thinks that because he’s a first-time offender that he will get a light sentence. But is he forgetting that he has a baby on the way?

Desperate to avoid going to prison, Jamie Tate (Alexander Lincoln) is telling the police that it wasn’t him that hit Moira, but Belle. Unfortunately, he is becoming more convincing by the day and Belle could go to prison for a crime that she didn’t commit. Meanwhile, her schizophrenia symptoms are coming back with a vengeance and she hears her dead mother’s voice.

Feeling for Belle and the possibility that she could go to prison, Nate comes up with an idea. He offers to confess to the hit-and-run so Belle doesn’t get arrested and go to prison. He ends up talking about his plan with Cain Dingle (Jeff Hordley), who is impressed. However, Nate’s pregnant girlfriend overhears and can’t believe it. Why would Nate confess and go to prison when he is getting ready to become a father?

Emmerdale spoilers reveal that Nate hasn’t thought this plan through. He also believes that he will get months in prison instead of years. Nate is convinced that his having no criminal record and being a first-time offender will get him a light sentence. Actor Jurell Carter told Inside Soap,

“Nate knows that if he doesn’t take the rap, Belle will go to prison. He actually doesn’t take Cain or the rest of the Dingle family into consideration – his decision is all down to his love and compassion for Belle. Nate can see that her mental health is deteriorating, and he wants to help her out.”

Nate ends up going to the police station and prepares to confess to the crime. However, will he actually go through with it? Or could Cain actually intervene?

Although the two men have a volatile relationship, the magazine did say Cain is impressed by Nate’s sacrifice. However, he also knows that Nate is about to become a father for the first time. So, could he end up intervening and prevent Nate from making the biggest mistake of his life?