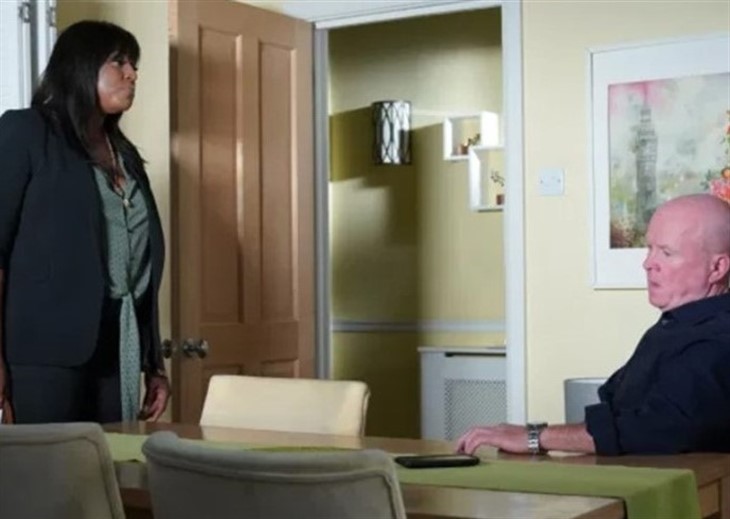 Eastenders spoilers reveal that Denise Fox (Diane Parish) has been visiting the son she gave up while he’s been hospitalized after an accident. She warned Phil Mitchell (Steve McFadden) to keep his distance, but he’s not listening. In fact, there was a noticeable interest between Phil and Ellie Nixon (Mica Paris). Could they end up having an affair and how will Denise react?

Phil and Denise had a son several years ago and the little boy was put up for adoption. However, the boy — whose name is Raymond — ended up hospitalized after a tragic accident. The crash took the lives of Raymond’s adoptive parents and sister, leaving him an orphan. Denise went to visit Raymond in the hospital and is devastated about the entire situation.

Eastenders spoilers reveal that Denise isn’t the only one that is trying to get close to Raymond after the tragedy. Phil is cautiously trying to get close to the boy, as well. Now, Denise ended up giving him a warning and even got Jack Branning (Scott Maslen) involved. Jack ended up delivering a threat to Phil using his police power. However, it seems that Phil is going to continue finding a way to get close to his son.

As we saw during a recent episode, Phil sat in the hallway at the hospital across from Raymond’s room. Putting on an innocent act, Phil and Ellie ended up having small talk. It was clear that there was a spark between the two, even though neither directly said anything about it. Viewers have noticed this, as well.

Viewers believe that Phil and Ellie could end up having a steamy affair, according to The Sun. However, Denise will end up finding out about it at some point. How will she react to the shocking revelation? Is it possible that Denise could end up taking extreme measures when she discovers what Phil has done?

Will she get Jack involved again and if so, what kind of consequences could Phil face? Or will he end up accomplishing his goal despite Denise’s effort to stop him? We will have to keep watching the soap to see how this story develops over the next few weeks.