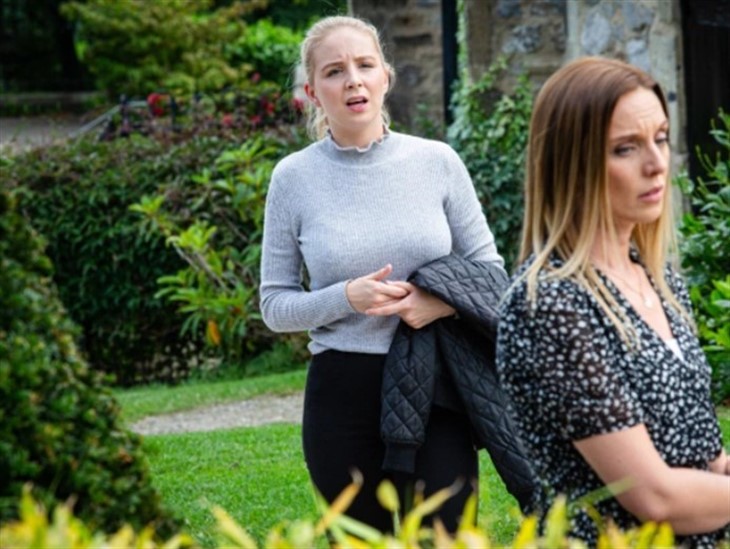 ITV Emmerdale spoilers reveal that Belle Dingle (Eden Taylor-Draper) is hearing voices. One of them happens to be of her dead mother. Nobody seems to notice that she is spiraling and doing things that are out of character for her. Eventually, the voices convince her that Andrea Tate (Anna Nightingale) is responsible for her misery and she must be punished.

After Jamie hit Moira Dingle (Natalie J. Robb), he left her lying on the road and fled the scene. Andrea was one of the first people that he told and she convinced him to keep quiet about his crime. Eventually, Jamie ended up telling Belle the truth about that night and that Andrea was blackmailing him.

Jamie turned into a cruel, sinister villain and Belle didn’t even recognize him anymore. She pretended to choose him over the Dingle family, which got her a lot of backlashes. Then, she exposed Jamie’s crime. However, she had no idea that he could so easily turn it around on her.

Emmerdale spoilers reveal that Belle is overwhelmed with everything going on. She thought that once the truth was out, there would be a huge weight lifted off her shoulders. She never imagined that Jamie would point the finger at her. She is also dealing with an incredible amount of stress and feels completely alone, even though she has her family back.

Even though Jamie is the one that hit Moira in his car, the police seem much more interested in interrogating Belle. Jamie has made a compelling case that Belle is the one who is responsible for the crime. Plus, it doesn’t look good that she forgot about driving Jamie’s car that day to get him some food. Of course, that was caught on CCTV, but there is none of Jamie running Moira down.

Then, Belle and Andrea made a pact to stick together and make Jamie pay for what he has done. There was concern that Andrea would switch sides, which has happened. Now Belle is going to look even more guilty and she could go to prison.

The voices start telling Belle all kinds of things, but the one that she pays attention to the most is her dead mother. That voice in particular tells Belle that everything going wrong in her life is Andrea’s fault. The hallucinations end up convincing Belle that Andrea must be punished.

With nobody paying attention to Belle’s mental health crisis, could she actually end up killing Andrea? If so, will she end up going to prison, and could Jamie actually get away with everything?