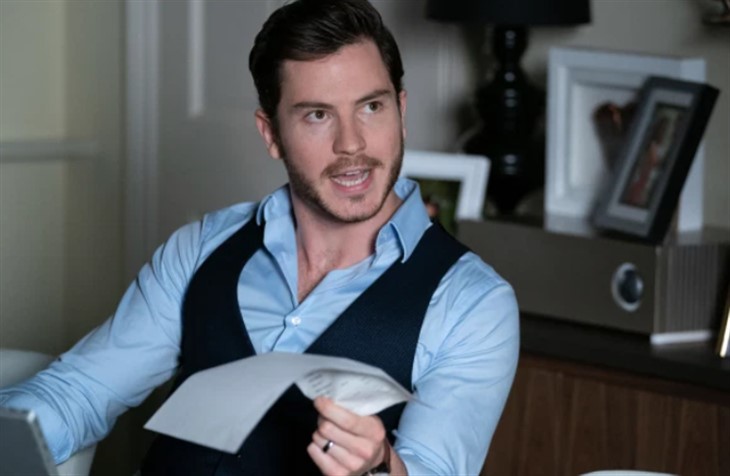 ITV Eastenders spoilers reveal that Gray Atkins (Toby-Alexander Smith) is questioned once about his wife’s death. However, as the investigation continues, police will get new information. In light of what they have discovered, they will come to Gray’s door to ask him some more questions. Will he finally crack and admit to murdering Chantelle Atkins (Jessica Plummer)?

Chantelle left the Taylor family holiday early and went home with her husband and children. She didn’t want to go, but felt she had no choice because he already had the little ones in the car. While the Taylors continued enjoying their time away, they had no clue of the horrors Chantelle was facing at home. They return to find out that the young woman is dead and a police investigation is underway.

Gray was asked about the tragedy when the case was first opened, which is routine. However, he’s not in the clear and police just might find something to prove he’s responsible.

Eastenders spoilers reveal that Mitch Baker (Roger Griffiths) notices that Kheerat Panesar (Jay Deol) has Chantelle’s memory box. Confused and suspicious, he asks Kheerat why he has it. This leads to a discussion of explaining to Mitch that Chantelle was unhappy in her marriage and planned on leaving.

Then, he shares his theory that Gray might be responsible for Chantelle’s death. When Mitch starts to add everything up in his head and hears the locals gossiping, he begins to wonder the same thing.

It is teased that during the week of September 21, police will receive new information regarding Chantelle’s death. What exactly is this new piece of information? Whatever it is, it leads to police paying Gray a surprise visit to ask him even more questions.

Is it possible that someone possibly witnessed something? Did one of Chantelle’s web searches give the police a new clue? Did Kheerat come forward with what he knows about the Atkins’ marriage? Or could Gray just not be as convincing as he thinks?

Will Gray Atkins Crack And Confess?

We all know that Gray doesn’t react to pressure or stress very well. Each time he had a lot going on with work, he would take it out on Chantelle. With her dead, he has nothing to vent his frustrations on and the pressure could keep building inside of him. He is an attorney, so he’s well-versed in how criminal investigations go. Despite this, the police may already suspect that he’s involved in Chantelle’s death.

Will he finally crack under the pressure and confess to murder? Or will the police be forced to gather every piece of evidence they can to prove Gray killed his own wife?