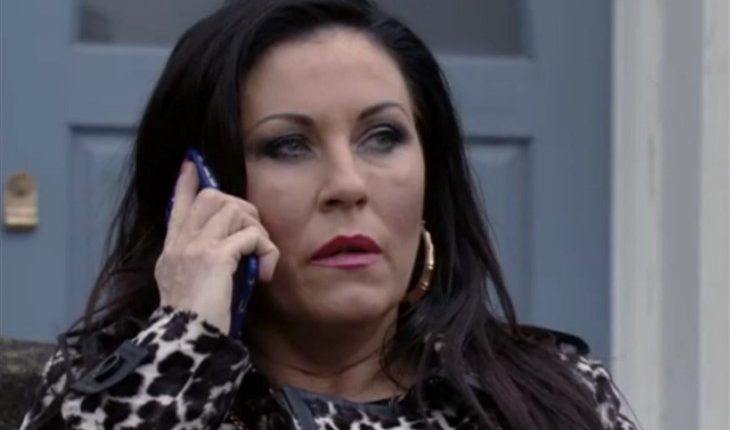 EastEnders spoilers reveal that soap vet Jessie Wallace is returning to the BBC sudser as Kat Slater. The return comes after the star allegedly served a two-month suspension for reportedly appearing on the set while inebriated.

Davood Ghadami who plays Kush Kazemi divulged on the soap’s spin-off show, Secrets From The Square, that indeed rumors that Kat will be back on-screen when the soap comes back from its coronavirus lockdown hiatus are true.

Fans had been speculating like mad that the fan fave would return and a sighting on set days ago only fueled the rumor mill.

According to the actor, Wallace is now back filming as Kat along with a select group of actors. At the same time he spilled the news of Wallace’s return, Davood revealed that his character Kush will encounter a “testing” during a lockdown.

David told fans that, “The last thing we saw was him having a bit of difficulty with Jean, and him trying to sort it out and going about it the wrong way, but he’s forgiven by Jean and let back in. It’s a very testing time, and what happens at the other end of it is so exciting!”

EastEnders Spoilers — Was Jessie Wallace Given A Two-Month Suspension From EastEnders?

The show itself has confirmed that Jessie Wallace is reprising her role as Kat Slater in Walford very soon.
It was reported that earlier this year, showrunners asked Wallace to a meeting to discuss an incident that occurred while she was working. After the meeting outlets claimed that the star was reprimanded during the meeting for being under the influence of alcohol while she was filming scenes as her alters ego.

At the same time, it was alleged that Wallace’s suspension necessitated a quick rewrite of scripts to reflect her exit in a realistic way.

An insider told the Daily Star Sunday, “Scriptwriters are currently coming up with a storyline to explain Kat’s temporary exit from Walford. Bosses were left with no choice but to discipline her. During the meeting, she was told to sort herself out before returning to work.”

Be sure to tune in to EastEnders: Secrets from the Square on Mondays in order to keep up with the latest news.