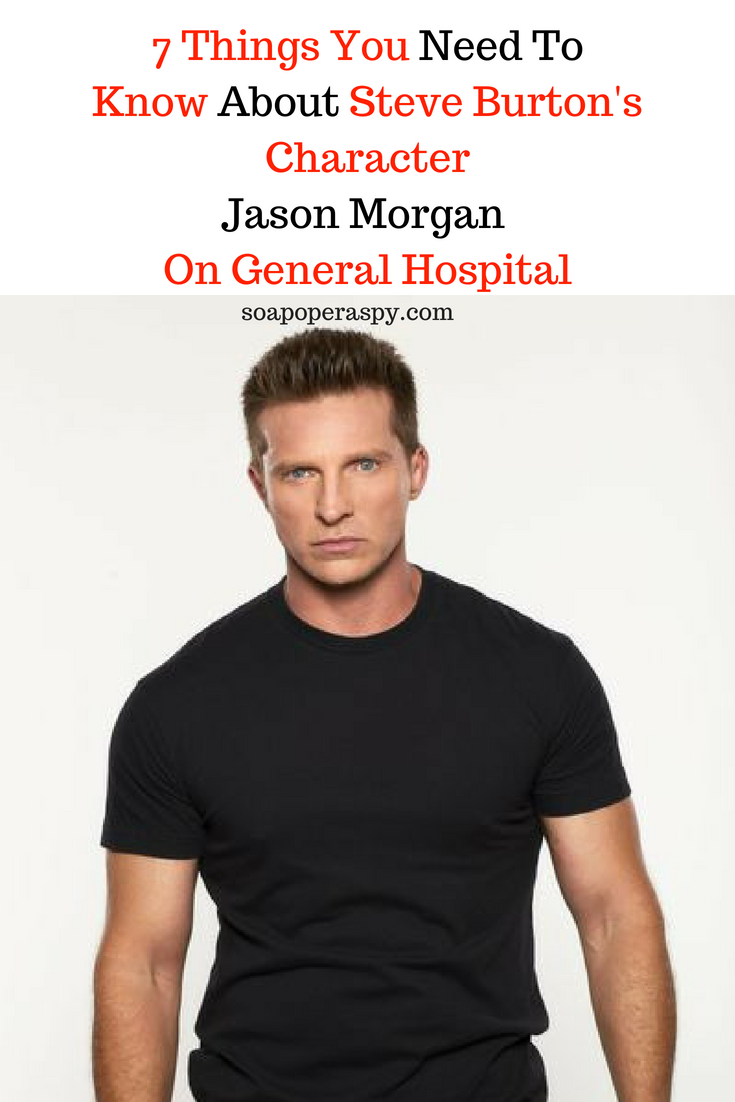 Let’s check out Jason’s character traits and see if you agree with our thoughts!

1. Jason Morgan is loyal to those he considers family

Jason Morgan met Sonny Corinthos shortly after waking up from his life-changing automobile accident in 1996. Sonny befriended him and Jason has been loyal to him ever since.

Sonny’s kids consider Jason to be their uncle and they love him without reserve. Jason would do anything for Sonny’s kids, he even claimed one as his own to save Sonny’s marriage.

Jason does all that he can to help those he loves and would die to protect them.

2. Jason Morgan once rode a motorcycle through the Quartermaine mansion to make a point.

Jason got tired of being controlled by his brain injury so he decided to teach his family a lesson. Did he go to extremes? Maybe, but what is a guy to do when his family takes his car and tries to lock him in a room until he sees things their way?

Jason might have been behaving badly, however, it was really through no fault of his own. Maybe the Quartermaine’s should have tried to be a bit more understanding of Jason’s injury. Afterall, Jason’s parents were doctor’s, they should have been able to understand more.

Jason eventually left the Quartermaine’s and survived nicely on his own and he still rides a bike to this day.

3. Jason Morgan used to be an active participant in the Nurse’s Ball.

Before Jason’s accident, he participated, with his family, in the Nurse’s Ball. Ironically, after his accident, he just writes a check but is great friends with Robin Scorpio, a local teen who was diagnosed with HIV in 1996.

Jason went on to date Robin at a time that most people were afraid to be close to HIV carriers. Robin is credited for showing Jason how to love after his accident.

Robin and Jason split up over Jason’s nephew, Michael, a boy that he raised for the first year of his life and is still very close to today.

4. Jason was never affected by any enemy like he was Franco.

Franco came to town in 2009 and actively sought Jason’s attention. When Jason didn’t respond to how he wanted, Franco decided to step up his game and send Jason pictures of Michael with Claudia’s body.

Franco went on to sexually assault Jason’s wife, Sam while making Jason watch via camera feed while being locked in a room on his honeymoon. For a time, Jason’s son Danny was thought to be Franco’s, a product of rape.

Even though Jason blames Franco for Michael being raped in prison, as well as Sam’s assault, Jason saved his life during the Port Charles earthquake this spring, simply because Sam asked him to.

Ever since their first meeting at Jake’s when Carly first came to town, he and Carly have been great friends.   Yes, at one time, they were even friends with benefits. When Jason was seeing Robin, but not in a sexual relationship with her, he was tangling the sheets with his best buddy Carly.

Eventually, Carly ends up sleeping with Sonny and Jason walks in on them. Jason leaves town which cements the fact, in Carly’s mind, that she and Jason will never be together. Jason eventually got over the hurt caused by Sonny and Carly and the three make up.

Carly still comes to Jason with all her problems and knows he will always be there for her. Even after disappearing for 5 years, Jason steps right back in to defending his best friend and trying to prove her innocence in two counts of attempted murder. Jason and Carly will always be best friends.

After the falling out they had over Carly year ago, Sonny and Jason have an understanding that they don’t date each other’s exes. Sonny and Jason consider this their code as friends and associates, however, there are exceptions to every rule.

When Sonny and Carly were separated over Alcazar in 2004, Sonny got involved with Sam McCall, a woman who had let him use her as a hostage the winter before. Sonny and Sam moved in together but Michael got injured and Sonny made a deal with God to give Michael his family back, Sam moved back to her boat.

Sam later discovered she was pregnant with Sonny’s child and eventually Jason ended up claiming the baby as his own. While living together and waiting for her birth, Sam and Jason fell in love. Jason was determined not to be with Sam but love won out and they eventually became a couple, years later they were married and had a child of their own.

When Jason decided to propose to Sam, he called on Maxie Jones for help with a ring, unfortunately, the ring flew off Maxie’s finger and into the city’s sewer system. Jason didn’t want to postpone his proposal so he needed a substitute ring until Maxie found the one he had bought.

Jason already had a romantic dinner planned and had set a time for Jason to meet him on the roof, he had no time to find another ring, besides the one he picked was perfect. Thank goodness Jason apparently has spare parts in his garage because the next best thing turned out to be a lug nut

Jason proposed to Sam using the lug nut, which Sam eagerly accepted and proudly wore. Eventually, Maxie found the ring but lost it again so Sam and Jason actually went through their engagement and marriage with a lug nut for an engagement ring and a love meant to last a lifetime.

WHAT DO YOU THINK ARE THE MOST IMPORTANT JASON MORGAN CHARACTER TRAITS?

Days of Our Lives Spoilers: Lucas, Will, and Rafe Pulled Into Allie Horton’s Story

EastEnders Spoilers: Tiffany & Keegan Get Back On Track, However More Drama For Keegan Coming