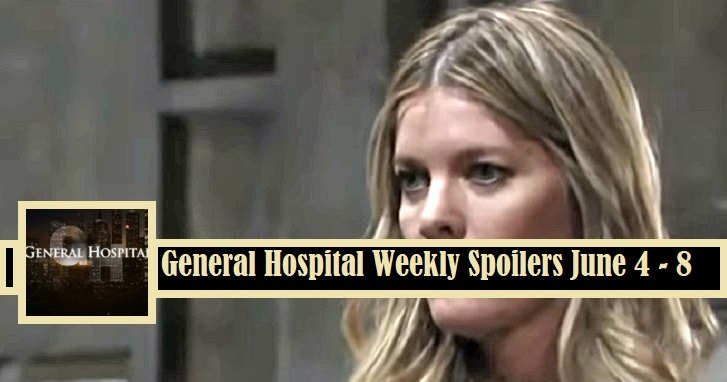 General Hospital (GH) spoilers for the week of Monday, June 4th through Friday, June 8th tease that we will have a week filled with shockers, secrets revealed, and let’s not forget plenty of drama. We have a very exciting week heading our way and you will not want to miss a moment of the action!

General Hospital spoilers tease this week we will learn more about who has taken Peter August (Wes Ramsey) captive and the culprit is not Nina Cassadine (Michelle Stafford). Although, it looks as if an emotional Nina is out for revenge she is not the one behind taking Peter.

Nina was only summoned by a text and will find herself in the middle of a shocking and dangerous situation. The kidnapper will have plans for Nina as well. As this is all going down Sam Cain (Kelly Monaco) and Jason Morgan (Steve Burton) will be working hard to find Peter for two different reasons.

Meanwhile, Anna Devane (Finola Hughes) will make a trip to Berkeley to fill her daughter in on the truth. Anna will finally let Robin Scorpio-Drake (Kimberly McCullough) know that she has a brother and all the details surrounding it. Robin, on the other hand, will not handle the news so well and it will be more information than she can deal with at the present time. She will also not be so forgiving.

So Anna and her daughter’s relationship will take a hit and we must wait to see if Robin comes around to the idea of having a brother. Do you think she will eventually forgive her mother for keeping this from her for so long?

Elsewhere, Drew Cain (Billy Miller) will take the steps to move forward with his plans of erasing all the memories he has of Jason Morgan’s. Drew is ready to move on with his life and he no longer wants Jason being any part of him. He has high hopes that once he gets rid of the memories that maybe some of his own will resurface.

Dr. Andre Maddox (Anthony Montgomery) has warned him of the risk and is very hesitant about helping him. Sam Cain will be very worried for Drew and will work to find the flash drive so he can have his own memories re-implanted. Do you think she will find it in time?

For the other residents of Port Charles, Sonny Corinthos (Maurice Benard) will offer his wife some advice. Nelle Benson (Chloe Lanier) will feel victorious. Oscar Nero (Garren Stitt) will show his support. Kim Nero (Tamara Braun) will weigh two sides of a story. Ava Jerome (Maura West) will share what she witnessed and Griffin Munro (Matt Cohen) is caught by surprise. So as you can see we have an eventful week coming up, so make sure to stay tuned to ABC’s General Hospital.

Make sure to stay tuned to ABC’s General Hospital to see how this storyline unfolds. Don’t forget to check often with Soap Opera Spy for all your latest spoilers, news, updates, and much more.

The Young and the Restless Weekly Spoilers June 4 to 8: Sabotage, A Custody Battle, And Shocking Arrest