EastEnders Spoilers: Tiffany & Keegan Get Back On Track, However More Drama For Keegan Coming 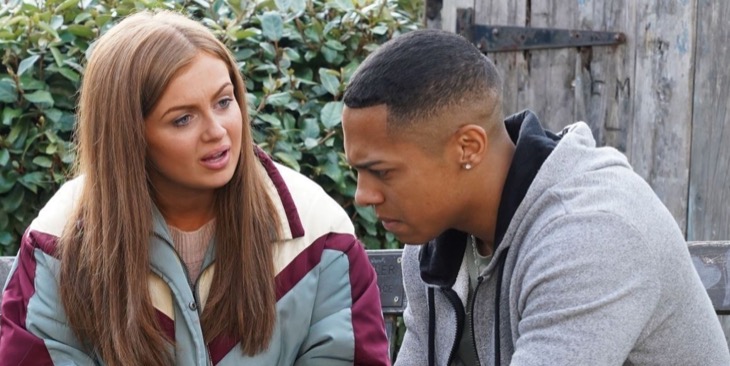 BBC EastEnders Spoilers and updates hint that there will be more trouble ahead for Keegan as things begin to look up for him. Keegan has been going through a lot lately as he has been the target of constant discrimination from law enforcement. This has led to him feeling more and more angry and mistreated. He feels as though he is not being understood by the ones around him. Which has created a divide between him and his loved ones.

Things begin looking up once again when a video is put out, revealing the true actions that happened at the party when law enforcement showed up. With his innocence being shown right in front of him, he was told not to do anything for the time being. However, a frustrated Keegan ignored the words of Jack and decided to post the video online.

This caused some tension between him and Jack, with Tiff being stuck between the two understanding both sides of the argument. However, soon things may get easier for Tiffany as she has a heart to heart with Karen which push her to make things right with Keegan. The two might be able to get back on track as she gives him a pair of trainers that belonged to his late friend. However, this peace may not last long.

A customer goes on to accuse Keegan of being a drug dealer and this causes Tiff to step in to defend him against the customer. However, this may cause more drama as Keegan is upset that Tiff decided to step in instead of letting him handle things himself. This causes and angry Keegan to storm off, but things do not end there as he later comes back to find that the food truck has been vandalized by the customer who has returned and destroyed it.

the crowd watching Keegan's van get vandalised and robbed.#eastenders pic.twitter.com/sl8uMsoCzs

This leads him to hit rock bottom, as he reveals that he did not sort out the insurance, which means that there is nothing that can be done. Keegan’s dreams have come crashing down around him now that his food truck has been destroyed. It seems that Tiffany will not be able to help Keegan who will push her away, Keegan will instead find comfort in Karen.