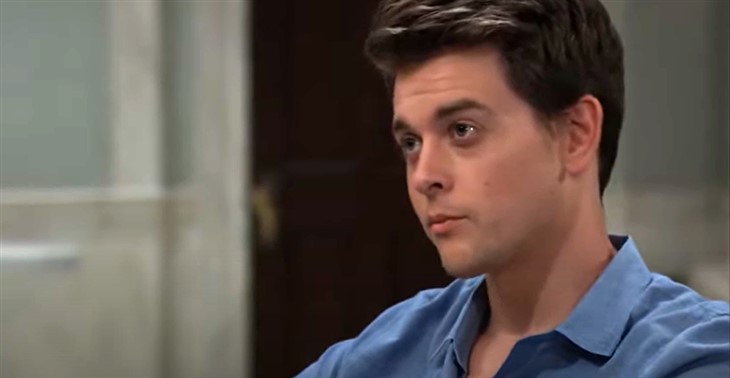 ABC General Hospital Michael Corinthos (Chad Duell) has to be the most immature adult man on set. Michael has changed so drastically since Jason Morgan (Steve Burton) first disappeared that he’s unrecognizable. It is time for Michael to man up and grow some backbone.

#1 Michael Corinthos Used To Be Determined

General Hospital’s Michael Corinthos (Chad Duell) was always the mini mobster. Michael tried to run people out of town. Michael tried to strike up deals. Michael was forever sticking his nose in his father’s business. Michael used to be far more like Sonny Corinthos (Maurice Benard) when he was younger. Michael needs to figure out where his determination went.

#2 Someone Needs To Save Michael Corinthos’ Son

General Hospital’s Michael Corinthos’ son Wiley Quartermaine Corinthos (Theo and Erik Olsen) needs his father to save him from his psychotic mother. As a teenager, Michael killed his stepmother to protect his baby sister. However, Michael won’t let anyone take out Nelle Benson Jerome (Chloe Lanier). Young Michael would have already taken this woman out. Why is Michael sitting idly by and letting the law take care of something that his father could have already done? Michael should take the initiative and get rid of Nelle now.

#3 Michael Corinthos Has Lost His Company

General Hosptial’s Michael is so gullible that he has let Ned Quartermaine (Wally Kurth) steal the family business from him. Michael stepped up when someone needed to take over ELQ and he has done his best with the company. Michael asked Ned to take over temporarily but he had no intention of taking his leave of absence permanent.

If anyone else had taken over ELQ, Michael would have aggressively taken the company back. Michael didn’t let Nicolas Cassadine (Marcus Coloma) take the company without a right. Michael needs to man up and go after Ned as well.

#4 Michael Corinthos Is His Father’s Child

General Hospital News Update: Nicolas Bechtel Is Freaking Out Over His Sister, Why? – https://t.co/GLX9uXRdiT via @ourteentrends #gh #generalhospital

General Hospital’s Michael has not been able to keep a girlfriend for any amount of time. Michael’s women have mostly treated him wrong instead of being true to him and their relationship. Michael needs someone who loves him for himself. Michael needs to reboot his life and his priority and keep his son safe. Michael deserves to be happy but he needs to step up and make something happen for him.

Will General Hospital’s Michael man up and make a better life for himself and his son?

TLC ’90 Day Fiancé – The Other Way’ Spoilers: Tania And Syngin Are Benefitting From Marriage Counseling