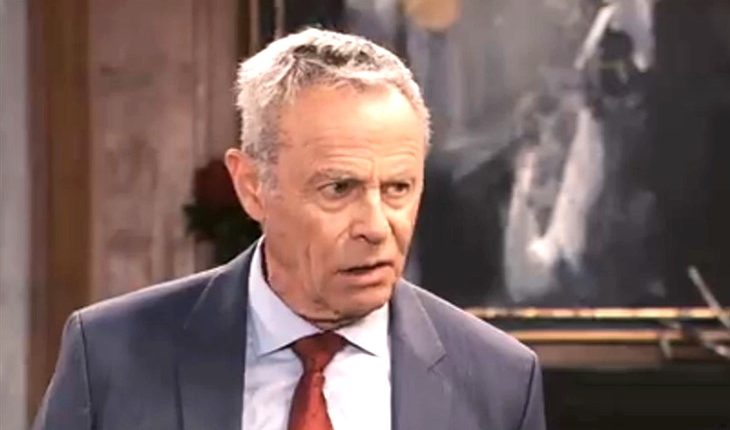 ABC General Hospital spoilers and updates suggest that Robert Scorpio (Tristan Rogers) could head out of Port Charles in the near future on a quest to bring his former wife, Holly Sutton (Emma Samms) back alive. GH fans know that up until now, Scorpio has believed that Holly bit the dust … but could it be possible that isn’t the case?

GH viewers who have been paying attention since the beginning of the year know that Robert Scorpio was closing in on Peter August (Wes Ramsey). In order to throw Scorpio off his trail, Peter was seen making shadowy phone calls.

During those calls, Peter repeatedly asked if the “diversion” he had planned for Scorpio was ready. Not long after Peter pulled the trigger and asked his obscure accomplice to create the diversion, Scorpio received a mysterious phone call. In that phone call, Scorpio got the horrible news that his former wife was dead.

Everyone watched as Scorpio spiraled down into multiple bottles of alcohol. Drunk, Scorpio placed the blame for Holly’s death squarely on Peter August’s shoulders.

The powers that be threw GH fans a genuinely good loop, however, when it was revealed that while Peter had definitely planned something … he had no intention of having Holly murdered. His evil coconspirator made certain to mention that something had happened to Holly, but that he hadn’t killed her. Peter is therefore at least marginally off the hook. Moreover, it sounded like it was possible that Holly had lived through whatever accident she’d gone through.

While that won’t make Scorpio feel any better vis-à-vis, Peter, it could give him enough hope to head out on an expedition to bring Holly back alive. Some have wondered if Scorpio might even recruit the aid of the bumbling Damian Spinelli (Bradford Anderson). If anyone could help Scorpio right now, it would be Spinelli. After all, Spinelli has already suggested that the two team up to take down Peter August. It’s likely then that combined with Spinelli’s flair for the dramatic and his sense of adventure, Spinelli would be quick to say yes.

Whether all this happens or not, and how the producers plan to wrap up the story of Scorpio, Anna Devane (Finola Hughes), Peter and Holly, is still up in the air. However, it’s a fair bet that they’ll want to hurry and get at least portions of this story finished.

That’s because Tristan Rogers is a great actor but he’s getting up there in years … and considering the reality of the Covid-19 pandemic … well, it might be better if Tristan wasn’t on set with everyone else. Then too, there have been rumors of a tight budget at General Hospital and the health crisis has likely hit the soap hard.

With all that in mind, both Tristan and the producers may feel more comfortable bringing him back once the national health crisis has passed.