Young And The Restless Last Week In Review: Mia Fakes A Pregnancy – The Coven Stand Trial – Is Summer A Match?

The Coven were on trial on Young and the Restless this week for the murder of J.T. Hellstrom (Thad Luckinbill) and boy did things get ugly fast.

When Christine (Lauralee Bell) finished her opening statement, Victor (Eric Braeden) stood up in the peanut gallery and started yelling that everything Christine had just said was a fabrication. He was then promptly thrown out of the courtroom. It’s too bad he wasn’t cited for contempt of court, then he could have been put into a cell next to his wife Nikki (Melody Thomas Scott).

Mariah (Camryn Grimes) had to take the stand and she did well, until Nikki and Victoria’s (Amelia Heinle) lawyer Michael (Christian LeBlanc) questioned her. Even though she claimed someone had anonymously emailed her the video of the Coven moving J.T.’s body, Michael pressed the issue about the first time she saw it. Tessa (Cait Fairbanks) sat in the gallery waiting to see what Mariah would say. Will she betray her girlfriend?

Meanwhile, at the Rosales apartment, when husband Rey (Jordi Vilasuso) slipped a pair of handcuffs on her for attacking his sister beside the Abbott’s pool, Mia (Noemi Gonzalez) blurted out that she was pregnant. And it didn’t take the writer’s long to let viewers in on a little secret – Mia is lying about the pregnancy to save herself from going to jail. 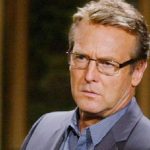 When she was sitting in the hospital waiting room passing the time until Rey returned, she got chummy with a pregnant woman and asked her if she wanted to make some money. The pair left and viewers assumed they went into the Ladies Room so the woman could pee on a pregnancy test for Mia.

Her ruse worked and when they got back to their apartment, Mia showed Rey the positive result. The Keystone Cop agreed not to arrest her and believes he’s going to be a first-time dad. Give your head a shake Rey. Now we are all left wondering how long Mia will be able to keep up her fake pregnancy farce?

Young And The Restless – Summer Pretends To Be Selfless

Summer (Hunter King) showed up at the hospital and Kyle (Michael Mealor) was immediately suspicious of her intentions. She told him she was going to be tested as a liver donor for Lola (Sasha Calle). But as she anxiously awaited the results, she slyly asked Nate (Brooks Darnell) if the donation procedure was dangerous.

Clearly, Summer is hoping she won’t be a match. But won’t it be a kick in the teeth if she actually is? She’ll have a big decision to make and the Snowflake isn’t exactly well known for her selflessness. But with Lola’s life on the line, will Summer be willing to do the right thing?

General Hospital Spoilers: Will Anyone Believe Franco That Ryan Chamberlain Is The Killer?