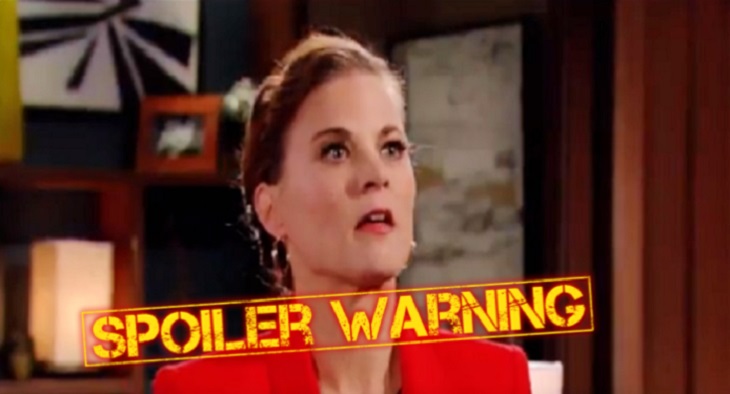 “The Young and the Restless” spoilers for Monday, March 4, tease that Marah Copeland (Camryn Grimes) will continue to lie. On the witness stand, Mariah faces Michael Baldwin’s (Christian LeBlanc) pressure to admit the truth about the video. She sticks to her story about receiving the footage anonymously, but Michael keeps pushing.

Sharon Newman (Sharon Case) gets upset at the way Mariah’s being treated and urges Brittany Hodges (Lauren Woodland) to do something. Once Brittany manages to take over questioning, she notes that the ladies were carrying a rug to the vehicle. Brittany thinks that adds up since they told Mariah they were doing a closet purge.

Once a recess is called, Nick Newman (Joshua Morrow) questions Michael’s strategy. Michael notes that he just wanted to set the stage for a potential blackmail reveal later. He only intends to use it if he has to.

Nearby, Brittany fills Sharon in on Michael’s tactic. She notes that he could take Mariah and Tessa down to help his clients. Outside the courtroom, Tessa Porter (Cait Fairbanks) attempts to console a nervous Mariah, who’s worried the whole truth will come out.

After court resumes, Phyllis Summers (Gina Tognoni) takes the stand and gets grilled by Christine Williams’ (Lauralee Bell). She struggles to answer in a way that doesn’t get twisted around. Christine wants Phyllis to admit that Victoria Newman (Amelia Heinle) hit J.T. Hellstrom (Thad Luckinbill), too. Phyllis says she can’t recall and gets a reminder that she’s under oath.

Christine also forces Phyllis to do a demonstration of what happened to J.T. She uses that to highlight the fact that J.T.’s back was turned. Phyllis tries her best to point out that J.T. was a serious threat. She wants everyone to know there was danger and Nikki had every right to attack the intruder.

Christine keeps pushing until Phyllis snaps at her, but Christine gets testy as well. She tells the jury that this was murder, not self-defense. Michael and the judge aren’t happy about that statement, but Christine is done with her star witness.

Next, Michael takes the opportunity to mention that there’s no body. He insists there’s no proof that J.T. is dead. Phyllis can’t explain why the corpse is missing and when pressed, confesses that she hates Victor Newman (Eric Braeden). Michael spins it like Phyllis is vengeful and even wanted to keep Victoria away from Billy Abbott (Jason Thompson).

Brittany tries a similar strategy. She indicates that sending Victoria and Sharon to prison would knock out two of Phyllis’ rivals. Once her testimony wraps up, Phyllis speaks to Jack Abbott (Peter Bergman) as she’s leaving. She assures him she didn’t know it would go down like that.

A secret confession forces a desperate decision this week on #YR. AND will saving herself cost Phyllis her man? Don’t miss what happens next! pic.twitter.com/DCklnY5zW0

Afterward, Jack tells Billy they can’t let Jabot take a hit, too. He wants changes, but Kerry Johnson (Alice Hunter) thinks Jack is jumping the gun on Phyllis stepping down. Jack counters that Phyllis can’t be trusted. Meanwhile, Nick chats with Billy and suggests Phyllis may be battling some regrets right about now.

Michael blasts Nikki and Victoria for not telling him everything about the incriminating video. He’s tired of all the secrets and argues that they’re the ones who will suffer for it. At the coffeehouse, Summer Newman (Hunter King) supports Phyllis after that brutal courtroom drama. Phyllis knows she’ll be held responsible by the others if they all go down.

Summer vows to stand by Phyllis and receives a call from Dr. Nate Hastings (Brooks Darnell), who says she may be a liver donor match for Lola Rosales (Sasha Calle). She has to come in for additional testing to get a definitive answer.

“The Young and the Restless” spoilers say Summer will indeed be confirmed as a match next week. We’ll give you updates as other Y&R news and rumors emerge. Stay tuned to see what’s next in Genoa City.