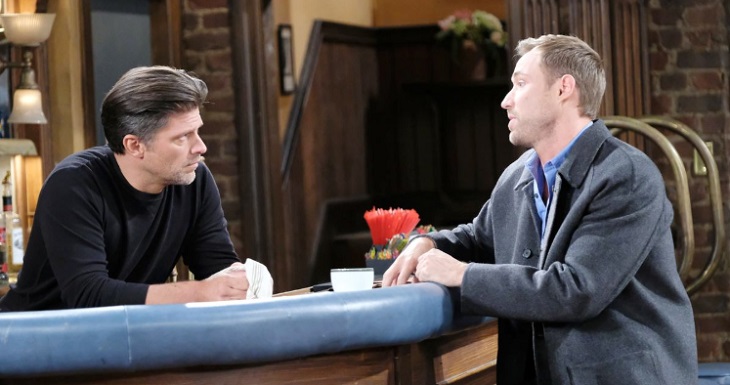 “Days of Our Lives” spoilers for Tuesday, March 5, tease that Chloe Lane (Nadia Bjorlin) will make a startling discovery. She’ll spot some evidence that leads her to believe she’s being monitored. Once Chloe’s got proof of this perilous spy, she’ll most likely fill Stefan DiMera (Tyler Christopher) in. Chloe will undoubtedly be concerned about El Fideo’s (Andoni Gracia) associates coming after her again.

The bad news is there’s indeed a spy watching Chloe. The good news is he doesn’t mean her any harm. “Days of Our Lives” spoilers say Brady Black (Eric Martsolf) is the person behind Chloe’s latest “threat.” He’s been concerned about Chloe’s safety, but he doesn’t think Stefan’s the right man to trust. As a result, Brady hired someone to look out for Chloe and make sure she’s OK.

However, it sounds like “Days” won’t reveal Brady’s involvement just yet. For now, Chloe will just have to worry and wonder. She’ll also keep leaning on Stefan for support and growing closer to him in the process.

Days Of Our Lives – Rafe And Ted’s Confrontation Heats Up

Over with Rafe Hernandez (Galen Gering) and Ted Laurent (Gilles Marini) – spoilers say their confrontation will get worse. Rafe isn’t happy about Ted making moves on Hope Hernandez (Kristian Alfonso), so he’ll warn him to stay away from her. He won’t want Ted stirring up trouble in his marriage, but Ted doesn’t seem too scared! It’s clear that this rivalry is only going to intensify in the coming weeks.

Other “Days of Our Lives” spoilers say Tripp Dalton (Lucas Adams) will continue to provide reassurance. He’s letting Haley Chen (Thia Megia) crash at the loft until she can figure out her next move. Haley will remain fearful, but Tripp will do whatever he can to keep the cops in the dark.

Unfortunately, Claire Brady (Olivia Rose Keegan) won’t do the same. Once she finds out Haley is living with them now, Claire will have a big problem with it. She’ll do whatever she can to eliminate Haley as a romantic rival – including teaming up with Eve Donovan (Kassie DePaiva) later this week.

Finally, DOOL fans can expect plenty of frustration for Rex Brady (Kyle Lowder). He just wants to marry the girl of his dreams, but Sarah Horton’s (Linsey Godfrey) putting up a fight. Rex will insist Eric Brady (Greg Vaughan) might be the only one who can change Sarah’s mind, but it’s more complicated than he realizes.

Sarah and Eric have developed some strong feelings for each other, so some heartbreak’s looming for Rex eventually. We’ll give you updates as other “Days” details and rumors emerge. Stick with DOOL and don’t forget to check Soap Opera Spy often for the latest “Days of Our Lives” spoilers, rumors, updates and news.

Young And The Restless Last Week In Review: Mia Fakes A Pregnancy – The Coven Stand Trial – Is Summer A Match?