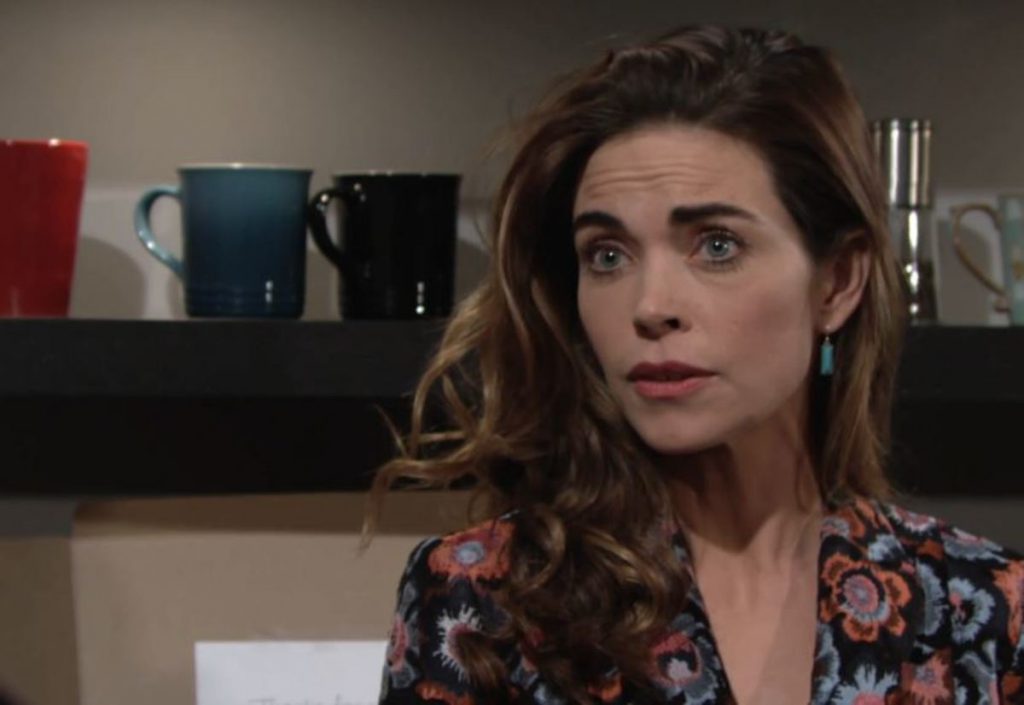 The Young and the Restless spoilers for Wednesday, August 21, tease that Billy Abbott (Jason Thompson) will meet up with Victoria Newman (Amelia Heinle) at home, where she’ll tell him that he forgot to pick up Johnny Abbott (Holden and Ryan Hare). She’ll worry that he’s got Delia Abbott (Sophie Pollono) on his mind, and he’ll relay that he hasn’t been sleeping and is on edge.

Meanwhile, Sharon Newman (Sharon Case) will be in shock over Adam Newman’s (Mark Grossman) sudden marriage proposal. They’ll chat in Chancellor Park and Adam will turn on his charm, telling Sharon that nobody knows him like she does, and that they need each other.

Sharon will let him know that she has her life together and she’s not going to go back to chaos now. She’ll say that the other night when they were together was a mistake, although she does care about him. Adam will to manipulate her by saying that if he got her back, he thinks he could let everything else go, and she’ll call him out on it. Ultimately, he’ll ask her to be honest with herself and will leave her to think about it.

Y&R Spoilers – Billy Abbott Walks Out On His Family

Next on Y&R, at Society, Billy will arrive late to a family meeting to discuss the Abbott Exchange/Jabot merger. Jack Abbott (Peter Bergman), Abby Newman (Melissa Ordway), Ashley Abbott (Eileen Davidson) and Summer Newman (Hunter King) will all be in attendance. Summer will notice a text from Theo Vanderway (Tyler Johnson) telling her that he’s busy.

Billy will announce to everyone that they need to reconsider the merger because he has serious doubts about Ashley and he’s afraid that she’ll turn on the family again. Ashley will try to explain that this is what John Abbott (Jerry Douglas) would want, and she’ll point out that Billy made mistakes, too. They’ll bicker, and Jack will get involved, but Billy will say he can’t trust Jack and bolt.

Next on Y&R, Devon Hamilton (Bryton James) will offer Theo a full-time job at LP. Theo will then say that he’d be a better fit as head of Power Communications instead of Mariah Copeland (Camryn Grimes). Devon won’t fall for it, and he’ll suggest that Theo can approach Mariah about working for her. Theo will relay that he now wants to make his home in Genoa City.

Meanwhile, Summer will meet up with Phyllis Summers (Michelle Stafford) at the rooftop bar. She’ll inform her mom about Theo’s earlier text, and that Zoe Hardisty (Anna Grace Barlow) used to party with Theo and Kyle Abbott (Michael Mealor) in New York. Phyllis will say that if Summer sees Theo again, then it should be on her terms.

Next on Y&R, Jack will go to Victoria’s house and fill her in on Billy’s behavior at the family meeting. Victoria will relay what Billy has been going through lately, and she’ll say that she’s concerned that Billy doesn’t seem to want to get better because the nightmares make him feel closer to Delia.

At Crimson Lights, Billy and Phyllis will meet at Billy’s request. They’ll discuss what’s going on with the merger and his history with Summer before getting to the reason Billy wanted to meet; he wants information about Adam. Phyllis will relay that she and Adam had a falling out, and through the course of their conversation, Billy will mention that Chelsea Lawson (Melissa Claire Egan) just got her hands on a lot of money. Finally, he’ll warn Phyllis to get on the right side or risk being collateral damage.

Next on Y&R, at the rooftop bar, Jack and Celeste Rosales (Eva LaRue) will met up and discuss the recent ordeal with Adrian Rosales (Jay Montalvo) and his attempt to reconcile with her. Jack will be disappointed to hear that Celeste will be headed back to Miami soon.

Meanwhile, Theo will chat with Mariah at the bar. Theo will say that he’d like to work with her, and she’ll eventually agree to open a line of communication. They’ll spar a bit, and Summer will appear on the scene. She and Theo will discuss Zoe a bit and why he brought her to Kyle and Lola Abbott’s (Sasha Calle) wedding. They’ll end up kissing and on good terms.

Phyllis will also arrive and find Adam. She’ll let him know that she has found a way to raise the money for her stake in The Grand Phoenix, and that it won’t be long until she is able to squeeze Abby out of the deal. Phyllis will then leave Chelsea a voicemail message.

Next on Y&R, Victor Newman (Eric Braeden) will find Abby at Society and tell her that he overheard Phyllis tell Adam that she plans to squeeze her out of The Grand Phoenix deal. Abby will say that she looks forward to squashing Phyllis’ attempt. Victor will warn Abby about Phyllis, and Abby will say that he’s given her a lot to think about.

Finally, on Wednesday’s new episode of Y&R, Sharon will show up at Adam’s door, as he opens the door and grins.