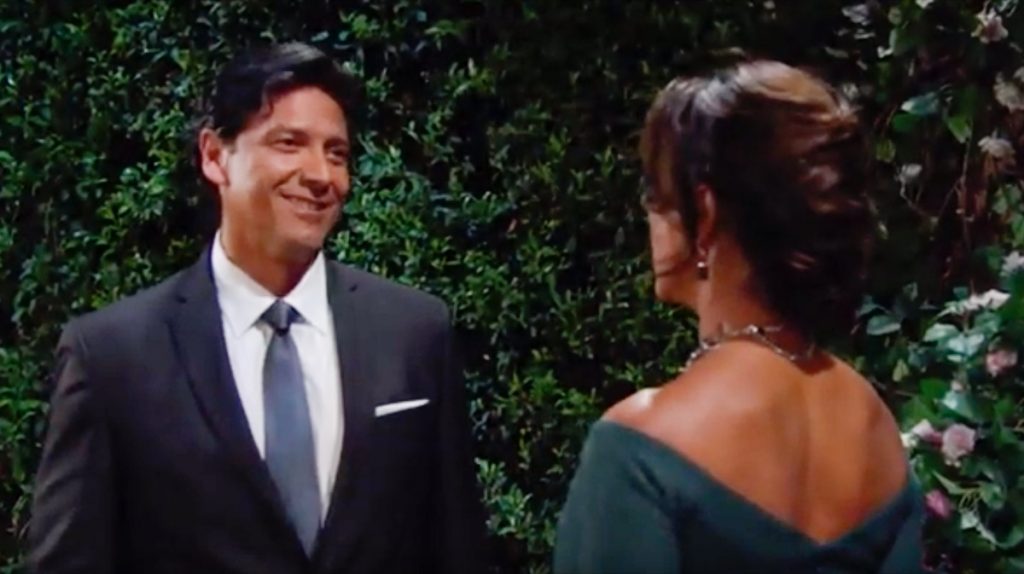 The Young and the Restless spoilers tease that Lola Rosales (Sasha Calle) is not pleased with the fact that her estranged father Adrian Rosales (Jay Montalvo) decided to crash her wedding to Kyle Abbott (Michael Mealor). And she’s not the only one. Rey Rosales (Jordi Vilasuso) is also furious to see him there!

The Young and the Restless head writer Josh Griffith puts it this way, “Celeste Rosales [Eva LaRue] worries that Adrian’s presence will cause major drama, so she makes the decision to keep his arrival a secret from Lola. Rey is furious that Adrian had crashed his sister’s wedding. He cannot believe that Adrian ignored Lola’s wishes and picked the most important day of her life as an opportunity to resurface and try to make amends with the family.”

Griffith adds, “Rey has not seen Adrian in many years. Rey’s anger is a result of a lifetime of hurt feelings that he has experienced since his father walked out on his family. However, Adriana is a smooth operator and is confident he can charm his way into the family’s good graces and be welcomed back. Celeste does her best to keep the peace between father and son, but Rey will stop at nothing to make sure that Lola’s wedding day isn’t ruined and he received help from an unlikely ally.”

Theo Vanderway Is A Problem, Too

With that said, Adrian isn’t the only wedding crashes that Lola and Kyle have to worry about. There’s also Theo Vanderway (Tyler Johnson) who has been doing everything in his power to convince everyone that Kyle is not Genoa City’s golden boy. As a matter of fact, he keeps on threatening to let the cat out of the bag about Kyle’s past. That’s the last thing that Kyle wants to deal with right now.

The Young and the Restless Spoilers: Kyle and Lola’s Wedding Disrupted By Theo and Zoe – Kola Chaos Ensues https://t.co/0Qk0ZIiwbA pic.twitter.com/DdqPelvfSL

With so much drama going on before, during and even after the wedding, you won’t want to miss any of the action. Will Kyle and Lola be able to make it despite all of the chaos and constant interruptions from their so-called friends and family? Fans will find out soon enough!