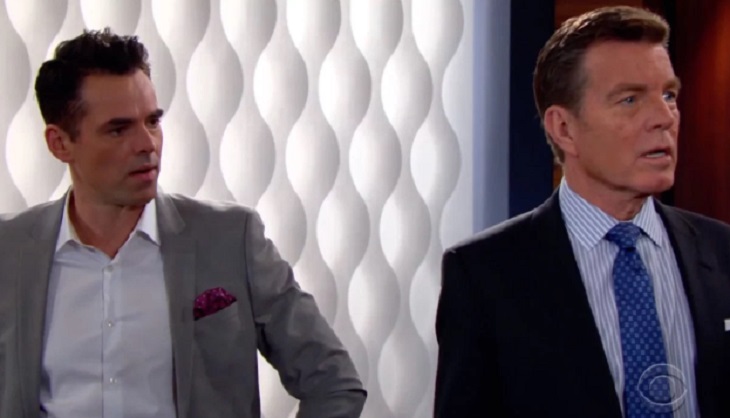 As of the moment, Adam Newman (Mark Grossman) is a villain in many people’s eyes on ‘The Young and the Restless’. But Billy Abbott’s (Jason Thompson) increasingly fragile state appears to be establishing a status switch.

Billy’s mind, not Delia Abbott’s (Sophie Pollono) soul, has been telling him to attack Adam. The grieving father who, like Delia’s still-embattled mother, Chloe Mitchell (Elizabeth Hendrickson), has been re-broken by Adam’s latest return from the dead.

While Billy has seemingly righted himself within the last year, he’s only fronting stability now. Lost in the activity of the ‘Kola’ wedding, Traci Abbott’s (Beth Maitland) magnificent historical fiction book’s development, and Jabot’s merger with My Beauty is Billy’s mental stability crash.

Young & The Restless Spoilers – Vickie Knows Something Is Wrong

At least Billy has confided in Vickie Newman (Amelia Heinle) and has seen a therapist. No one can accurately claim that Billy allowed himself to go overboard. Basically the poor guy just needs others to help him more.

Unfortunately for Billy, his increasing actions are leading to serious trouble. His fragile emotions are causing him to think that Delia is calling out from her grave. Unless some otherworldly events are actually happening, or some nefarious earthly force is gas-lighting Billy, he’s choosing to interpret messages wrongly, has placed Delia’s doll at various places in the Chancellor mansion and in ‘Villy’s’ house, and is also adding to, or writing, cryptic messages.

Hopefully Victoria (or someone else) will have time and be in the right place to prevent Billy from doing something to himself and, or Adam.

Assumed dead after an SUV crash in 2014, which saw Billy Miller’s (Billy) edition and the Michael Muhney (Adam) version speed dramatically off a dark road, and in presuming the Justin Hartley (Adam) take was blown to bits in the cabin in 2016, Thompson’s version has seen too much.

Chloe was fully frazzled after learning that Adam was alive. So after her shot at the tack house didn’t work, she decided to reveal herself to Billy as still alive and then made a fateful request that he honor their daughter.

Billy was shaken by Adam’s return. But it was Chloe’s request at Delia’s grave that set Billy off.

Since that time he’s become obsessed with the past. His forgiveness of Adam, as then played by Hartley, has evaporated.

As the storyline develops, Adam is being positioned as Billy’s fully intended target. Sure, Y&R fans believe that Grossman’s version of this character will survive whatever happens. But they don’t know what consequences Delia’s dad will face as a result.