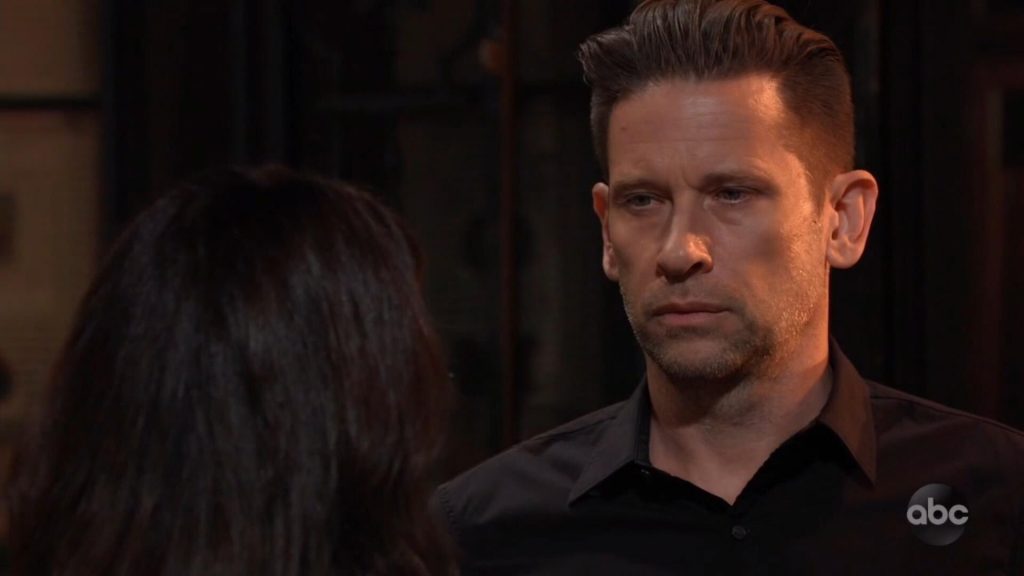 At the Port Charles Police Department, Robert Scorpio (Tristan Rogers) has some news that he tells Commissioner Jordan Ashford (Briana Nicole Henry) he has to deliver in person. Other General Hospital spoilers tease that he has bad news; have Drew Cain’s (Billy Miller) remains been found, or is Robert’s news about something else?

Robert would be the one to receive results from the recovery mission that the WSB took over to find Drew after his plane crashed in the Gulf of Aden, bound for Afghanistan and taken over by fake pilots. Viewers will have to tune in tomorrow to find out!

Cameron Webber (William Lipton) wants to be on the stand; the time must be close for when his stepfather, Franco Baldwin’s (Roger Howarth) competency hearing. Viewers will recall that when the Shadybrook orderlies took him off the docks where he had met Kim Nero (Tamara Braun) and his wife Elizabeth Baldwin (Rebecca Herbst) took control of the situation, it was only for a forty-eight hour psych hold; a competency hearing to determine Franco’s mental condition must be held before Franco can be held in Shadybrook any longer. Most likely, Cameron wants to tell how Franco stepped in and took his place before Drew’s memories were transferred into his brain.

Meanwhile, back in Shadybrook, Franco – or “Frankendrew” – owes someone an apology. Spoilers say that Monica Quartermaine (Leslie Charleson) will pay him a visit, and also that Elizabeth will be ruthless. More than likely Franco will be apologizing to Monica than Elizabeth, because Elizabeth gets on “Frankendrew’s” nerves and he would not feel he had anything to apologize to her about! Viewers will wonder, however, what he would need to apologize to Monica about!

Elsewhere, Kim is meeting with Attorney Martin Gray (Michael E. Knight) who has been looking for someone to help her get “Drew” out of Shadybrook and it looks like the same attorney that’s working on Nelle Benson’s (Chloe Lanier) parole has taken her case! Martin is excited as he tells a dejected looking Kim that he’s going to put Drew in the center ring! The only problem is, putting it that way makes him sound like he’s talking about a circus instead of a legal proceeding!

Ava collapses on #GeneralHospital. Is her cancer back?

Read the #GH scoop below ⬇️⬇️⬇️https://t.co/F0uVtfI0ph

At Kelly’s, Maxie Jones (Kirsten Storms) and Peter are having a bite to eat, and it sounds like they may be talking about the Sasha Gilmore (Sofia Mattsson) secret being blown to smithereens, as well as Nina Reeves’ (Cynthia Watros) life and her wedding! Maxie asks Peter, how hard is it to just tell the truth, as Peter looks just a little bit worried!

Meanwhile, over at the Port Charles Police Department, it looks like Damian Spinelli (Bradford Anderson) has finally gotten permission to listen to the fake recording that implicates Sam in the premediated murder of Shiloh, and he’s obviously found what he was looking (or listening) for, as he shouts, Ah HA!