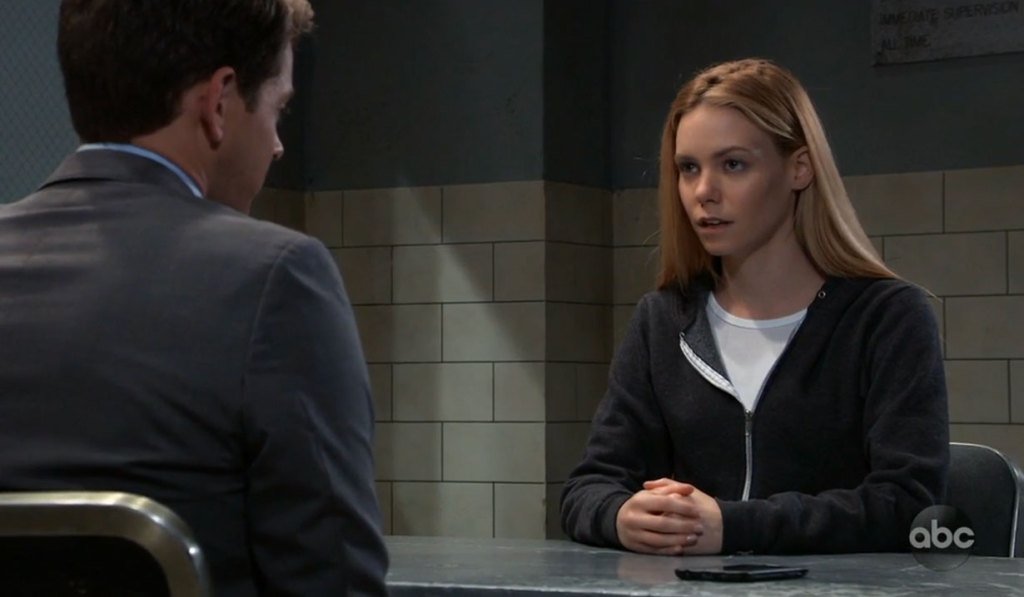 General Hospital spoilers tease that Tuesday, October 8 will be another day full of suspense and drama for GH fans!

At the church where Valentin Cassadine (James Patrick Stuart) and Nina Reeves (Cynthia Watros) are in the midst of their wedding and ready to say “I do”, Lulu Spencer (Emme Rylan) has decided Nina should say “I don’t” and blurted out that Sasha Gilmore (Sofia Mattsson) is not Nina’s real daughter!

Curtis Ashford (Donnell Turner) had tried to intervene but Lulu was having none of it, and as he returned to his seat with his wife, Commissioner Jordan Ashford (Briana Nicole Henry) she become very suspicious, and while she could be talking about a case, she tells her husband that clearly there’s someone behind the scenes pulling the strings! Is she talking about Valentin, or a case she’s trying to solve at work?

Presumably at Pentonville Prison, Nelle Benson, (Chloe Lanier) who is waiting for her parole hearing, calls someone and tells them she needs their help. Perhaps she’s calling someone to testify in her behalf at her parole hearing, and tell the parole board that her character has changed and she’s sorry for the way she used to live her life. Question is, who could she call? She doesn’t have that many friends who believe in her!

Back in Port Charles, Detective Harrison Chase (Josh Swickard) talks to a very emotional Willow Tait, (Katelyn MacMullen) who is in tears, about baby Wiley Cooper-Jones (Erik and Theodore Olson) and asks her, now that Shiloh Archer (Coby Ryan McLaughlin) is no longer a factor, he wants to know what changes she wants for Wiley, who is there with them. Perhaps she regrets putting her baby up for adoption and now wants him back? That could prove problematic, especially since he’s not really her baby; he’s Jonah Corinthos!

Ava Jerome (Maura West) goes to Pentonville Prison to visit Ryan Chamberlain, (Jon Lindstrom) her ex-lover. Ryan tries to play on Ava’s loneliness and need for acceptance, as well as expressing his own. As they talk on opposite sides of the prison glass on the prison phones, he tells Ava that he hopes she needs him as much as he needs her!

After Lulu’s rude interruption of her wedding, Nina has asked Sasha to end Lulu’s quest to ruin her life and wedding once and for all by telling her that she is Nina’s daughter! Nina pleads with Sasha to straighten Lulu out, telling her that one word from her will end this once and for all! Question is, what will it end? Will it end Lulu’s accusations or Nina’s wedding and relationship with her fiancé Valentin and “daughter” Sasha?