General Hospital Spoilers: Elizabeth And Kim Cross Paths — Is A Catfight Ahead? 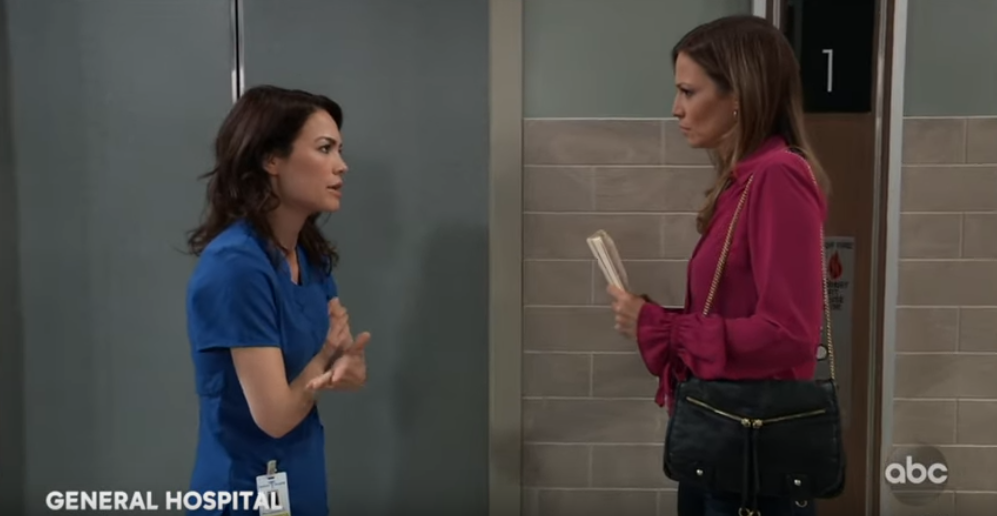 General Hospital Spoilers – Kim Nero Is In Love With A Ghost

As General Hospital viewers know, Kim is in love with what amounts to a ghost who happens to be inhabiting Franco Baldwin’s body. Kim and Liz once were friends, but that friendship has been quickly deteriorating into frenemies and now possibly enemies, because Kim insists “Drew” in Franco is real, and since the real Drew Cain (Billy Miller) is presumed dead, what is left of him consisting of pre-2012 memories and personality in Franco’s brain is a ghost!

Elizabeth has been become more and more aggressive lately with trying to hang onto Franco which she is determined is “in there somewhere” and she will strike out at anyone who says differently or tries to encourage “Drew” to stay “Drew”! Kim has already slept with “Drew” and tried to get legal representation for him to get him released from Shadybrook, and Elizabeth is having none of it!

He is HER husband and KIM needs to stay HANDS OFF and MOUTH SHUT! Viewers will recall in a recent episode she tried to hardball Julian Jerome (William DeVry) into hurrying up and moving Kim to Manhattan, after when as soon as he could get a word in edgewise, he informed her that he and Kim were through and so the move wasn’t happening, at least on his part! The two have similar problems, Julian not being able to compete with “Frankendrew” and Liz not being able to compete with Kim, because of “Frankendrew”!

General Hospital Spoilers – Is A Catfight Ahead?

General Hospital spoilers don’t specify if this is Shadybrook or GH where this happens, but if it is GH we can be assured that if Head Nurse Epiphany Johnson (Sonya Eddy) is anywhere within earshot when the ruckus between Liz and Kim gets loud, she will be quick to break it up and Liz might get a forced leave of absence! Kim had already cut ties with the hospital and put her patients into the care of other obstetricians.

She is going to need to get herself straightened out and get affiliated elsewhere or go into private practice soon, she’s got to be running out of money! If this altercation takes place in Shadybrook, security may be called for both of them, unless a GH psychiatrist happens to have patients in there or Dr. Andre Maddox (Anthony Montgomery) is there and breaks it up! It is a tremendous tug of war between the two women, one wanting Franco to stay Drew and the other wanting Drew gone from Franco’s brain!