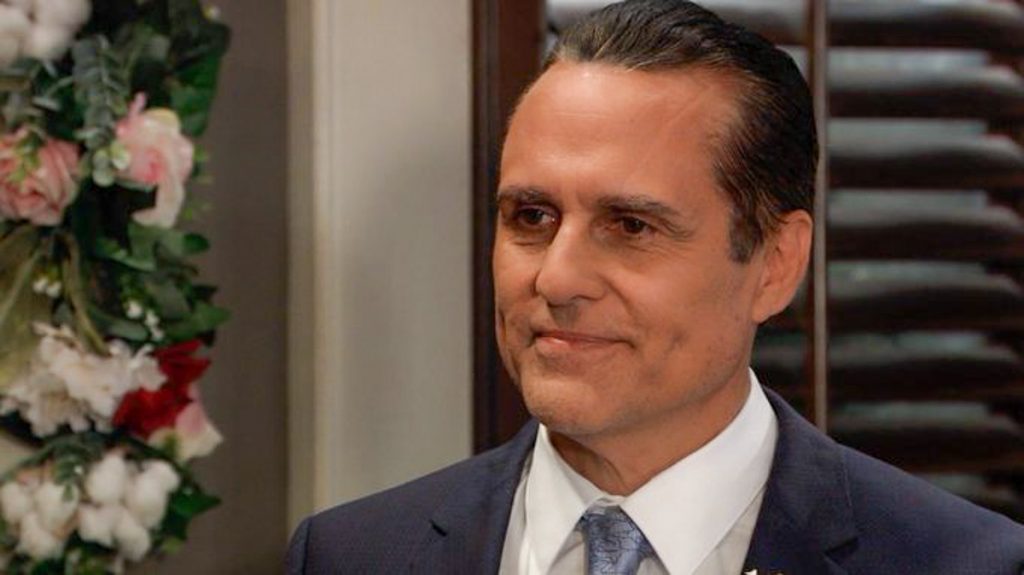 General Hospital spoilers for Wednesday, November 13 tease another exciting day of drama for GH fans. Bear in mind that in the United States, your program may be pre-empted or interrupted by the President Trump Impeachment Hearings, so be sure to check your local ABC affiliate to see if it is being carried on an alternate station (ME-TV, COZI-TV, ANTENNA-TV, etc) or your station’s website for instructions for viewing or you can check HULU or abc.com after 8:00 pm and look for General Hospital. Dailymotion.com may have it as well.

Sonny Corinthos (Maurice Benard) brings Avery Jerome-Corinthos (Ava and Grace Scarola) for a visit, and tells someone “I think you’ll make an exception for this one”. It sounds like they are visiting Ava Jerome (Maura West) in Shadybrook, and he’s responding to a shout out of “No visitors please!”

Sonny will also be meeting with Ava concerning Avery’s well-being, and it wouldn’t seem he’d be pushing for full custody of Avery while having Avery with him. Avery doesn’t look upset or frightened as Sonny brings her through the door, she’s probably been told Mommy doesn’t feel well and is in the hospital. She has a big smile on her face and viewers can be expecting a big smile on Ava’s face as well!

Josslyn Jacks (Eden McCoy) sits down by her mother, Carly Corinthos (Laura Wright) and tells her it’s the perfect time to finish their conversation. She is likely talking about the conversation where she wanted to move in with her dad, Jasper Jacks (Ingo Rademacher).

Carly will to shut that idea down for the time being since Joss would find out Nikolas Cassadine (Marcus Coloma) is staying there and then another person would have to keep the secret that he is alive! It’s not certain that Joss would even remember or recognize Nikolas, but they can’t take that chance. Carly is having enough problems not telling Laura Collins (Genie Francis) especially!

At the Port Charles Police Department, Jason Morgan (Steve Burton) and Anna Devane (Finola Hughes) have returned Charlotte Cassadine (Scarlett Fernandez) to Lulu Spencer (Emme Rylan). Laura also watches as Charlotte refuses to go home with Lulu! She can’t be afraid of Cassandra Pierce (Jessica Tuck) finding her mother through her, she saw her blow up with a boat she was trying to escape on in the Port Charles harbor! However, she did see Nikolas sneaking around the corner of the pier with a gun; it’s hard to tell if he recognized her or knew who she is, but did she recognize him from a picture in her mom or grandma’s house and is afraid he might be coming after them and doesn’t feel safe because she saw his gun? Or is she afraid that she saw a ghost?

Robert Scorpio (Tristan Rogers) wants to tell Anna something, which quite honestly is not his business to tell! He actually has a smile on his face as he tells Anna there is something that she should know, however, other General Hospital spoilers say that they may be interrupted by Detective Harrison Chase (Josh Swickard), who will give Robert a little advice; likely to butt out between his brother Dr. Hamilton Finn (Michael Easton) and Anna!

Hayden Barnes (Rebecca Budig) and Finn are still at Anna’s house, where Hayden and their little girl Violet Barnes-Finn (Jophielle Love) spent the night, since Violet fell asleep on Anna’s couch. Hayden tells Finn it’s not too late to back out; perhaps he decided he wants to get back together with Hayden for Violet’s sake? She could also be talking about Finn wanting to be a part of Violet’s life and for her to know he’s her father, as well.

At Jax’s house, Jax explodes at Nikolas again and gets in his face, telling him he came about a quarter inch from blowing his cover! Nikolas keeps going places he shouldn’t be going and helping people he shouldn’t be helping, and this not so quiet conversation could come from talking about Charlotte on the pier and wondering if she recognized him! She would have been too young to know him from before he disappeared, but as previously mentioned, Lulu and Laura more than likely have photographs of Nikolas and Charlotte may have been told that he is dead. What was he doing with that gun, anyway? If he was planning to kill Cassandra, Valentin beat him to it!

Stay tuned to GH and keep checking General Hospital spoilers frequently for all the latest news, updates and development